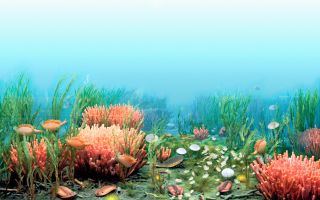 Ancient marine creatures stirred things up in Earth's atmosphere hundreds of millions of years ago, by burrowing in the ocean bottom.
(Image: © Phil Degginger/Carnegie Museum/Alamy )

What do humans have in common with the first animals that appeared on Earth? We're both responsible for global warming events (though, human-driven climate change is unfolding — and accelerating — over decades, rather than over millions of years).

About 520 million to 540 million years ago, life began booming in Earth's oceans, with diverse marine creatures digging busily in seafloor sediments and munching up organic matter. But as they did so, they were unwittingly sowing the seeds of a global climate crisis, according to a new study.

Little did these early animals know, but over the next 100 million years their burrowing habits would drive a major buildup of the greenhouse gas carbon dioxide (CO2) in the planet's atmosphere. Scientists recently used mathematical models to link these animals' emergence to a significant global warming event millions of years later, which caused mass extinctions just as animal evolution was getting started, the researchers reported.

The first burrowing animals on Earth appeared during the Cambrian period, about 540 million years ago, and the creatures tunneling into sea sediments at the time were comparable to the worms, mollusks and arthropods inhabiting the ocean floor today, lead study author Sebastiaan van de Velde, a doctoral candidate with the Analytical, Environmental and Geochemistry Department at the Vrije Universiteit Brussel in Belgium, told Live Science in an email. [These Bizarre Sea Monsters Once Ruled the Ocean]

During the millions of years before these diggers evolved, the ocean floor was topped with thick, undisturbed mats of microbes. Burrowing creatures changed all that, recycling the microbes and mixing them up within the seafloor sediment, Van de Velde explained.

"The presence and activity of animals in the seafloor — much like worms in garden soils — stimulates the breakdown of organic matter in the sediment," he said.

As these animals became more widespread, they transformed the seafloor wherever they lived. Their digging blended soils and organic material, and as they fed on and processed organic matter, they consumed oxygen and released CO2, "much like the burning of fossil fuels," Van de Velde said.

And these animals' activity had global consequences. All that digging and dining not only meant less oxygen in the ocean and in the atmosphere but also led to accumulations of atmospheric CO2 in sufficient amounts to heat up the entire world, the researchers reported.

"As this occurred on a global scale, oxygen was drawn down in the atmosphere, and CO2 increased, leading to global warming," Van de Velde told Live Science.

Evidence in the geologic record already indicated a period in Earth's past — about 100 million years after the first animals appeared — when CO2 levels and temperatures climbed. And the researchers suspected that this shift happened in response to the marine animals' mass recycling of formerly undisturbed microbe mats, according to the study.

Fossils told the scientists that these burrowing animals dug only 0.4 to 1.2 inches (1 to 3 centimeters) below the surface, while their modern counterparts dig to nearly 10 times that depth. Yet their models demonstrated that even such minuscule efforts could be dramatic enough to trigger planetwide change, driving conditions that made it tougher for the tiny diggers to survive, according to the study.

The example of these ancient creatures altering their world in a way that was ultimately harmful to them provides "an interesting parallel" to the much faster-paced human-driven climate change today, study co-author Tim Lenton, a professor of climate change and Earth system science at the University of Exeter in the U.K., said in a statement.

"We are creating a hotter world with expanding ocean anoxia — oxygen deficiency — which is bad for us and a lot of other creatures we share the planet with," Lenton said.

The findings were published online today (July 2) in the journal Nature Communications.