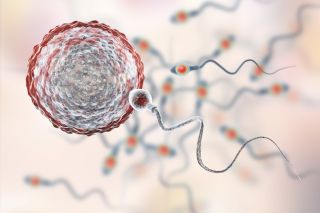 Human sperm cells are well-studied, so scientists were completely surprised to find a previously unknown structure in the little swimmers. And perhaps more surprising, this newfound structure may contribute to infertility, miscarriages and birth defects, the investigators said.

On the flip side, once scientists understand this structure better, it may help them develop new therapies for male infertility and learn more about early human embryonic development, the researchers said.

The newly identified part is a centriole, a barrel-shaped structure made of short microtubules. Researchers already knew that sperm cells contain one centriole, but the new discovery brings the total to two centrioles per sperm. [Sexy Swimmers: 7 Facts About Sperm]

However, the newfound centriole has a slightly different structure than the previously known one, so the researchers are calling it atypical in shape.

"This research is significant because abnormalities in the formation and function of the atypical centriole may be the root of infertility of unknown cause in couples who have no treatment options available to them," study researcher Tomer Avidor-Reiss, a professor in the Department of Biological Sciences at the University of Toledo in Ohio, said in a statement. "It also may have a role in early pregnancy loss and embryo development defects."

Previously, researchers thought that sperm carried just one centriole, which then duplicated itself if the sperm met an egg. That's because the egg does not have a centriole, while a zygote — or a fertilized egg — needs two centrioles to start the development of a fetus, the researchers said.

These centrioles play a pivotal role. They are needed for building the cell's cytoskeleton (the structure that maintains cell shape) and completing accurate cell division, the researchers noted.

By learning how centrioles work during the early stages of reproduction, scientists may be able to pinpoint if these structures are involved with any type of male infertility or later problems with the developing embryo.

"Since the mother's egg does not provide centrioles and the father's sperm possesses only one recognizable centriole, we wanted to know where the second centriole in zygotes comes from," Avidor-Reiss said. "We found the previously elusive centriole using cutting-edge techniques and microscopes. It was overlooked in the past, because it's completely different from the known centriole in terms of structure and protein composition."

This isn't the only recently uncovered structure in human sperm. Earlier this year, researchers announced the discovery of a mysterious spiral in the tail of human sperm; this structure may give the sperm a boost while it's swimming, Live Science previously reported.

The new study was published online June 7 in the journal Nature Communications.