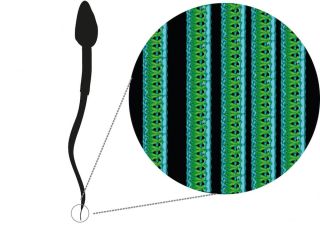 Scientists have spent decades studying the extraordinary abilities and anatomy of human sperm, so an international team of researchers was surprised to discover a mysterious, spiral-shaped nanostructure in the tails of sperm.

The newfound spiral may give sperm tails a boost, the scientists said.

Sperm need a highly effective tail so they can swim as fast as possible toward the egg and attempt to fertilize it. Each sperm tail has thousands of building blocks, the most important of which are called tubulins, the researchers said. These tubulins form long tubes known as microtubules in the sperm's tail. [Sexy Swimmers: 7 Facts About Sperm]

These microtubules are attached to thousands of motor proteins (proteins that can move) that pull and bend the microtubules, allowing the sperm to swim.

"It's actually quite incredible that it can work," study senior researcher Johanna Höög, a researcher in the Department of Chemistry and Molecular Biology at the University of Gothenburg, in Sweden, said in a statement. "The movement of thousands of motor proteins has to be coordinated in the minutest of detail in order for the sperm to be able to swim."

To get a better look at the sperm tail, Höög and her colleagues imaged sperm specimens with a Nobel Prize-winning microscope technique known as cryo-electron tomography, or cryo-ET. This method allows researchers to freeze tiny structures, such as sperm, and take a series of 2D pictures that can then be combined to make an incredibly detailed 3D image. Moreover, this method doesn't require any chemicals, which would obscure the smallest cell structures, Höög said.

"When we looked at the first 3D images of the very end section of a sperm tail, we spotted something we had never seen before inside the microtubules: [a] spiral that stretched in from the tip of the sperm and was about a tenth of the length of the tail," Höög said.

The researchers named the helical structure a "tail axoneme intra-lumenal spiral," or TAILS. It's still unclear exactly what TAILS does, what it's made out of and how important it is, they said. But the researchers have a few ideas they plan to study further, said lead researcher Davide Zabeo, a doctoral student in the Department of Chemistry and Molecular Biology at the University of Gothenburg.

"We believe that this spiral may act as a cork inside the microtubules, preventing them from growing and shrinking as they would normally do, and instead allowing the sperm's energy to be fully focused on swimming quickly towards the egg," Zabeo said in the statement.

Despite the surprise surrounding this finding, it's not the only recent sperm discovery. Just last year, researchers found that human sperm cells get an extra oomph when they swim, largely because of interconnected elastic springs in their tails that communicate with other regions of the tail, Live Science previously reported.

The new study was published online Feb. 9 in the journal Scientific Reports.