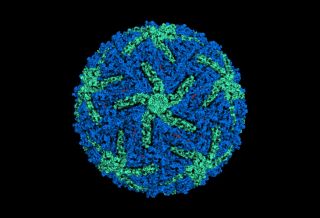 The 2017 Nobel Prize in chemistry was awarded to three scientists for their work in producing 3D images of life's molecular machinery.

Because of the achievements of this year's laureates, Jacques Dubochet, Joachim Frank and Richard Henderson, scientists can now freeze biomolecules (such as proteins) mid-movement and image them at an atomic resolution, according to Nobelprize.org.

With this cryo-electron microscopy, researchers can "visualize processes they have never previously seen, which is decisive for both the basic understanding of life's chemistry and for the development of pharmaceuticals," according to Nobelprize.org.

Before work by this trio, scientists thought that electron microscopes could be used only on dead material, as the strong electron beams destroy biological samples. But in 1990, Henderson, of the MRC Laboratory of Molecular Biology in Cambridge, England, did just that when he produced a 3D image of a protein using an electron microscope.

Columbia University's Frank took this technology a step further between 1975 and 1986; he was able to take the two-dimensional images generated by an electron microscope and merge them to create a sharp, 3D structure.

Dubochet, a professor at the University of Lausanne in Switzerland, added water to the mix. Typically, in an electron microscope, water will cause biomolecules to collapse. But in the early 1980s, Dubochet cooled water so quickly that it solidified around a biological molecule. In that way, the molecule retained its natural shape.

According to Nobelprize.org, after presenting his new strategy, in 1975 Frank said, "If such methods were to be perfected, then, in the words of one scientist, the sky would be the limit."

Following their achievements, electron microscopy has taken off, with images of everything from proteins linked to antibiotic resistance to the surface of the Zika virus, according to Nobelprize.org.