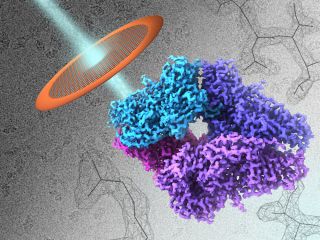 Researchers can now spy on proteins at nearly the level of their individual atoms, thanks to a new microscope technique.

This unprecedented view of the molecular world may help researchers design drugs and understand how medications interact with the environment in the human body, the researchers said in their report on the technique, published online today (May 7) in the journal Science Express.

"This represents a new era in imaging of proteins in humans with immense implications for drug design," Dr. Francis Collins, the director of the U.S. National Institutes of Health, said in a statement. "This near-atomic level of imaging provides detailed information about the keys that unlock cellular processes."

In the report, the researchers explained how they used the technique — called cryo-electron microscopy (or cryo-EM) — to show in exquisite detail how a drug bound to an enzyme and blocked its activity. [Video: See Cryo-EM in Action]

Working with an enzyme called beta-galactosidase, which is found in bacteria, the researchers shined a beam of electrons through a grid that held a solution of the enzyme, which was flash-frozen. The solution was kept at a temperature of about minus 346 degrees Fahrenheit (minus 210 degrees Celsius).

The resulting image shows the enzyme down to the contours of the atoms that make up its amino acids, said the study's lead author, Sriram Subramaniam, a researcher at the National Cancer Institute's Center for Cancer Research, who specializes in cellular and molecular imaging.

Enzymes are usually responsible for speeding up chemical reactions in cells. Understanding their structure, either alone or attached to a drug, could help scientists create new medications that can block or enhance their functions, according to the researchers.

The new method allowed researchers to see beta-galactosidase at a resolution of 2.2 angstroms (an angstrom is a one-billionth of a meter). Only X-ray crystallography has been able to show molecules on a similar scale, but that technique  requires getting molecules into an ordered arrangement, whereas with cryo-EM, molecules can be analyzed in more natural environment, Subramaniam said.

However, the technique required the researchers to take about 40,000 pictures of the enzyme in order to get this 3D view of the molecule.

"Each molecule is captured in a different orientation," Subramaniam told Live Science. "We can combine information from different views to build up a 3D image."

Until now, electron microscopes could not delineate individual atoms. "It's like a blurry image that's been sharpened," he said.