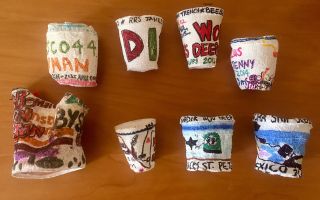 Marine scientists were crushing it on Twitter last week, sharing photos of highly decorated — and very squished — Styrofoam cups, which had been deformed and compressed by pressures encountered in the deep sea.

Researchers exploring the ocean bottom frequently take Styrofoam objects — often cups, but also mannequin heads or other carved foam models — and attach them to diving submersibles. The cups are typically embellished with pictures and decorative flourishes in permanent marker, or are emblazoned with names, dates and other details about the expedition.

At depths of hundreds of feet, water pressure begins to compress the lightweight objects. And at greater depths, they are squeezed even more dramatically, crushed to a fraction of their former size. When the colorful cups eventually return to the surface, they are much smaller and denser than when they started, the scientists' photos demonstrated. [Infographic: Tallest Mountain to Deepest Ocean Trench]

Beginning on Friday (June 8), a Twitter thread emerged with researchers sharing photos of their decorated Styrofoam objects. Regan Drennan, a research assistant at the U.K.'s Natural History Museum (NHM) in London, kicked things off when she tweeted photos of shrunken, decorated cups "from 5km deep!" (about 3 miles).

Marine biologist and science communicator Skylar Bayer then proposed the hashtag #shrunkencupoff, and deep-sea scientist Diva Amon, a research fellow at NHM, called upon fellow researchers to tweet images of "the amazing artwork" on their shrunken cups.

Amon's challenge was quickly taken up, as Bayer promptly tweeted a photo showing 29 shrunken cups from her 2007 expedition to the East Pacific Rise — a volcanic ridge in the Pacific Ocean — where they traveled to depths of 1.5 miles (2.4 kilometers) below the surface. Bayer had decorated the cups as "sort of a substitute for postcards," she told Live Science in an email.

"I kept one, of course, but the rest I gave to family members, friends, and even to the two little kids I was babysitting at the time," Bayer said.

On one cup, which Bayer gifted to a professor who had given her permission to take time off for the expedition, she wrote a message thanking him for letting her miss five weeks of class to visit the bottom of the ocean.

Styrofoam cups are made of beads from a type of plastic called polystyrene, and the beads are puffed up with air. During descents into the ocean, the accumulated weight of water increases and pressure builds up — about 14.7 pounds per square inch for every 33 feet (10 meters) of depth. As pressure mounts, it squeezes the air out of Styrofoam objects, Capt. Mark Wetzler, commanding officer of the National Oceanographic and Atmospheric Administration (NOAA) research ship Okeanos Explorer, wrote in a mission log in 2017.

"The amazing thing about this pressure is that it is uniform across the surface of the cup, so the cup does not crumble or deform," Wetzler reported. "The Styrofoam cup shrinks uniformly as it is lowered into the ocean and the air bubbles are pressed out of it."

But even if the deep-sea pressure on a cup is the same all over its surface, the cup's tiny bubbles of plastic aren't all the same size; if they were, all squashed cups would look exactly the same as the original cups, only smaller, Kim Martini, a senior physical oceanographer at Sea-Bird Scientific in Washington state, told Live Science in an email.

"Since the bubbles aren't uniform, some parts deform before others, causing some shrunken cups to appear misshapen," Martini explained.

On Twitter, scientists quickly followed Bayer's example and posted their photos of crushed cups from ocean expeditions. Some came from depths of more than 13,000 feet (4,000 meters) below the surface, such as this colorful submission by Maria Garagouni, a doctoral candidate with the School of Biological, Earth and Environmental Science and the University College Cork, in Ireland.

"Before" and "after" photos tweeted by deep-sea ecologist and science educator Andrew Thaler, manager of the marine science and conservation website Southern Fried Science, showed how much the cups shrank during their visit to the deep ocean.

A collection of cups shared by Julie Meyer, a research assistant professor in the Soil and Water Sciences Department at the University of Florida, represented several deep-sea dives: at the East Pacific Rise, the Mid-Cayman Spreading Ridge in the western Caribbean Sea, and the Axial Seamount in the northeastern Pacific, off the coast of Oregon.

Artfully designed shrunken Styrofoam heads, tweeted by marine biologist Craig McClain, executive director of the Louisiana Universities Marine Consortium, argued that crushed objects could also be represented by #shrunkenheadoff. The heads were crunched to their reduced size at a depth of about 6,600 feet (2,000 m) in the Gulf of Mexico, McClain told Live Science in an email.

McClain and two colleagues devoted hours to decorating the heads with Sharpies before sending them into the depths, as an art project during their free time while on the research vessel, McClain said.

A special hat tip for Styrofoam creativity goes to deep-sea diver and artist Karen Romano Young, whose foam top hat once fit an adult human head but is now a perfect fit for a seagull puppet after a deep-sea trip on board Alvin, a U.S. Navy submarine currently in use at the Woods Hole Oceanographic Institution (WHOI) and one of the world's first deep-ocean submersibles.

For scientists, these unique mementos capture and commemorate landmark moments in their oceanographic careers, "like a player keeping a game ball," McClain told Live Science.

"I have a shrunken cup from my first submersible dive. My first oceanographic cruise over two decades ago. My first oceanographic cruise as the lead scientist. My first time to the Antarctic Seas," he said. "I even have a cup that a former undergraduate sent me as a new Ph.D. student, after she went on her first hydrothermal vent submersible dive. She sent it back as a 'thank you' for introducing her to the deep sea."

"A shrunken cup can help someone really see with their own eyeballs what happens to something under extreme pressure," she added. "It's a little out of our imagination because we never experience those kinds of pressures ourselves."

"I use them during nearly every bit of deep-ocean outreach or education that I do with members of the public," Amon told Live Science in an email. "They're the perfect way to explain the huge increases in pressure that occur with increasing depth."

And though it's unclear when the cup-shrinking tradition started, considering that researchers are an inquisitive and curious lot, it's likely been taking place as long as Styrofoam cups have been available to scientists for deep-sea squishing, Martini said.

"People put a lot of weird stuff down at pressure to see what happens to it," she said, adding, "WE'RE SCIENTISTS — WE TRY THINGS."