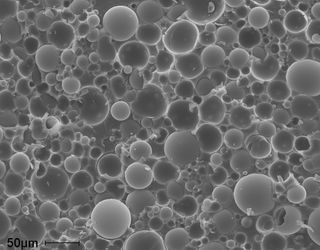 Nikhil Gupta is an associate professor and Steven Zeltmann is an undergraduate student researcher in the Composite Materials and Mechanics Laboratory of the Mechanical and Aerospace Engineering Department at New York University, Polytechnic School of Engineering. The authors contributed this article to Live Science's Expert Voices: Op-Ed & Insights.

Radio signals that may have been emanating from the flight recorder of Malaysian Airlines Flight 370 marked the beginning of a new phase of the search for the aircraft and its passengers. Once signals emerged, the investigation expanded to include exploration of the ocean floor to detect the aircraft and recover the block box.

The location of the black box is estimated to be about 15,000 feet (4.6 kilometers) below the ocean surface. The pressure at such depths in the ocean is about 455 times the atmospheric pressure at sea level. The remains of Titanic are located at a depth of 12,500 feet (3.8 kilometers) depth, which has pressure of about 380 atm. The additional 2,500 feet increases the pressure by 75 atm. In addition, the temperature is only 34 to 40 degrees Fahrenheit (1 to 4 degrees Celsius) at such depths.

Designing vehicles for exploration at such depths is a great challenge. The deep-sea exploration vehicle needs to be light enough to have buoyancy, but should be strong enough to withstand high pressure without imploding.

Both human operated vehicles (HOV) and remote operated vehicles have been constructed for oceanographic studies, treasure hunting and recovery and rescue operations. A famous example of an HOV is the craft that was built for the noted explorer and motion picture director James Cameroon's solo dive to the deepest part of the ocean, the Mariana Trench. The structure of his craft, like most similar vehicles, was mainly made of a novel material called "syntactic foam." [Into the Deep: James Cameron's Mariana Trench Dive (Infographic)]

Polymer foams are lightweight, porous materials composed of air filled pores in polymer materials. But their light weight comes with two major disadvantages: low strength and high water absorption, both of which are highly undesired for deep-sea exploration.

Not only would an ordinary foam be crushed by the pressure of the deep seas, water can easily enter such foams (like in a sponge) causing a craft to sink. Syntactic foams make use of tiny hollow particles to disperse air in a polymer and make it a lightweight foam. Use of hollow particles provides the advantage of the pores not connecting to each other. Even if such foams are damaged, they still do not absorb any significant amount of liquid since they pores are not interconnected. The hollow particles are usually made of glass and have diameters on the range of 4 ten-thousandths of an inch to 4 thousandths of an inch (0.01 to 0.1 millimeters) — 1 to 10 times the diameter of a human hair. Enclosing the air inside tiny glass shell does the trick of making the material lightweight while keeping it strong enough to withstand those high pressures.

The structure of a syntactic foam can be visualized in a 3-D computer model. Researchers analyze the computer models using modern techniques, such as finite element methods, to determine the compositions that will work the best under the high compressive forces encountered in deep-sea exploration. Some of the promising compositions are then manufactured and experimentally tested to ensure that the syntactic foams have the properties the analyses suggested.

When viewed under an electron microscope, the material looks like a tightly backed assemblage of little balls. Since all of the air pockets, the pores, are surrounded by glass, water cannot enter them. This means the material can be used underwater for extended times without breaking down and sinking. The addition of hollow particles also makes syntactic foams more thermally stable — they don't shrink as much as polymer foams would when the temperature drops.

Researchers are trying to continuously develop new syntactic foams that are lighter and stronger for improved payload capacity. In our lab, we have developed new methods to tailor the density, strength and thermal-expansion behavior of syntactic foams. Such methods can generate foams that provide high performance under the challenging environments of deep-sea exploration. Development of particles of high strength ceramics such as silicon carbide and alumina, rather than glass, and reinforcement of syntactic foams with fibers can help in improving their performance.