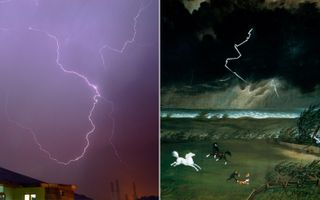 Compare the lightning from a 2018 thunderstorm in Srinagar, Kashmir (left) with the illustrated lightning in "American Painting of Running Before the Storm."
(Image: © Saqib Majeed/SOPA Images/LightRocket/Getty; Barney Burstein/Corbis/VCG/Getty)

If you draw lightning bolts like crooked zigzags, then you're doing it wrong — but at least you're in good company. Artists have drawn lightning incorrectly for hundreds of years, a new study finds.

When researchers looked at 100 paintings of lightning bolts and then compared them to photos of actual lightning, they found that artists tended to paint lightning with fewer branches than the electrified bolts have in reality — possibly because earlier artists were influenced by Greek sculptures of Jupiter's nonbranching, zigzag lightning bolt, the researchers said.

However, thanks to modern photography, artists nowadays tend to draw lightning with more branches, although that number is usually still lower than it is in nature, the researchers found. [Elves, Sprites & Blue Jets: Earth's Weirdest Lightning]

To remedy this, artists should "study a number of photos of real lightnings and memorize their most important morphological characteristics — namely, the typical number of branches and the tree(fractal)-like zigzagness," study senior researcher Gábor Horváth, the head of the Environmental Optics Laboratory at Eötvös Loránd University in Budapest, Hungary, told Live Science in an email.

The idea for the study took root after Alexandra Farkas, a doctoral student in biological physics at Horváth's lab, told her colleagues about William Nicholson Jennings (1860-1946), a pioneer of photography who took the first usable photos of lightning, in 1882. (For the historians out there, Thomas Martin Easterly actually made a daguerreotype of lightning in 1847, but Jennings usually gets credit for being the first photographer of the lightning bolt.)

To find out, he and his colleagues looked at 100 paintings of lightning created between 1500 and 2015, and also analyzed 400 photos of real lightning.

Next, the researchers did a small experiment, showing 10 people photos of lightning that quickly flashed on a computer screen. Quantity mattered, they found: The participants could correctly guess the number of branches if there were fewer than 11.

Since 2000, artists have improved in this regard, likely because digital images of lightning bolts have become more accessible, and so artists paint them with greater accuracy, Horváth said. "However, due to the above-mentioned underestimation, the maximum number of branches of painted lightnings (11) is much lower than that of real lightnings (51)," he noted.

The study will be published online Wednesday (June 6) in the journal Proceedings of the Royal Society A: Mathematical and Physical Sciences.