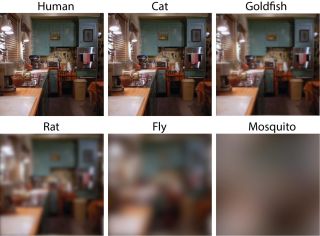 Various creatures see the same kitchen scene very differently. However, this image just represents how much detail an animal can see and doesn't account for the fact that the brain later processes this visual information and most likely sharpens it. So a fly's world probably isn't blurry, it just has less details than the human world does.
(Image: © Eleanor Caves)

If a butterfly, a cat and a person all stared at the "Mona Lisa," what would each see? While we may never know the answer, a new review of animal vision has some clues.

Even for a single person, the enigmatic expression on the "Mona Lisa" can change depending on where you look on the painting — if you look straight at her, she doesn't seem to be smiling, but if you look at another part of the picture, she does.

It turns out that her ever-shifting appearance may be due to a quirk in humans' visual acuity, or how sharp we see the world. Some theorize that Leonardo da Vinci purposefully painted the mouth of the "Mona Lisa" with brushstrokes that are more visible to your peripheral vision, through which you see an object in less detail than you would by staring straight at it.

But visual acuity doesn't just change dramatically across a person's field of view, it also differs between various animals and insects. In fact, there's a 10,000-fold difference in the way animals with the worst and the best visions see the world, according to a new review paper published in May in the journal Trends in Ecology & Evolution. [Vision Quiz: What Can Animals See?]

Most animals see the world in a lot less detail than we do.

"We are not the pinnacle of essentially any sensory system, except acuity," said Eleanor Caves, a postdoctoral researcher in biology at Duke University and the lead author of the new review. Regarding how detailed we see the world, "we're really close to the top."

Caves and her colleagues gathered hundreds of academic papers to get a comprehensive look at how sharp hundreds of species of animals, fish and insects see the world. Researchers typically define visual acuity with what's called "cycles per degree"— or how many black-and-white parallel stripes an animal can see in 1 degree of their visual world.

Studies measure cycles per degree in animals in two ways, Caves said. First, they dissect animal retinas and actually measure the density of the light-sensing cells called photoreceptors and translate that into cycles per degree. They also conduct behavioral studies by placing an animal in a circular tank with black-and-white stripes across the sides. If they rotate the tank and if an animal can perceive the stripes, the creature will begin to spin around because it will feel as if it is moving. If an animal can't perceive the stripes, it will see the walls of the tank as solid gray and stay put. By varying the frequency — and thus the size of stripes — researchers can discern how sharp their vision is.

Caves and her team fed cycle per degree information from various studies into software they previously developed that creates images as they might be seen through an animal's eyes. While some images, like those for shrimp, are very blurry, Caves cautions that this probably isn't how animals see the world because there's a lot of post-processing that happens after visual information reaches the brain.

If an eagle were to look at human vision with this same software, "it would think our world was blurry — and it's not," she told Live Science. [See the World from a Cat's Eyes]

The software "just tells you what visual information is available," Caves said. However, "you can't use information that you never received; if acuity is too low to detect a certain detail, it's probably not something that your brain can then work on further."

So, an animal with low acuity that stares at a brick wall may not see the individual bricks, but it also won't see the wall as blurry, Caves said. The brain will process the image enough so that the wall is clear, but the details are absent.

Because there is so much variation across the animal kingdom in how sharp each species sees the world, these visual acuity differences may play an important role in communication.

Visual communication has mostly been researched in terms of color vision, Caves said. For example, most insects can't see red, so the red patches on black widows' backs are probably invisible to their prey, whereas the red marks are alarming to potential predators who have evolved to avoid the toxicity that can accompany the color red.

In the same way, extravagant patterns on fish could be attractive to mates, but not distractive to low-acuity or far-away predators (acuity decreases with distance). Spiders might have elaborate spiderweb patterns that are invisible to insects ensnared by them but clearly visible to birds who don't bump into them, Caves said.

A big next step would be comparing an animal's visual acuity with their behavior, Caves said.

There's still so much we don't know about how animals see the world, she added. "The truth is that I can't even tell you what your perceptional world is like and you're a member of my species, so we certainly can't totally guess it for an animal."

It's too bad, really, that we can't ask a butterfly fluttering in front of the "Mona Lisa" — Is da Vinci's masterpiece smiling?