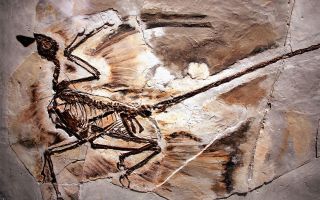 You are a Microraptor — a carnivorous, crow-size dinosaur that lived 120 million years ago. You have wings on all four limbs, a body covered in iridescent black feathers and a penchant for swallowing birds whole. You are, to summarize, totally awesome — and yet, you will be remembered primarily for your dandruff.

At least you are not alone. In a new study published May 25 in the journal Nature Communications, researchers detected tiny flakes of fossilized skin on the bones of three feathered dinosaurs —  Beipiaosaurus, Sinornithosaurus and the aforementioned Microraptor — as well as a primitive bird called Confuciusornis. All four creatures date to the Jurassic period (about 56 million to 200 million years ago), and all four had dandruff, the study found.

"This is the only fossil dandruff known," lead study author Maria McNamara, a paleobiologist at University College Cork in Ireland, told The Guardian. "Until now, we've had no evidence for how dinosaurs shed their skin." [This Rainbow Dinosaur Sparkled With Iridescence]

Of these four specimens, the Microraptor fossil — which dates to about 125 million years ago — represents the earliest known evidence of dandruff ever detected, according to The Guardian.

For the study, McNamara and her colleagues borrowed four fossils from the Institute for Vertebrate Paleontology and Paleoanthropology in Beijing, China. The team removed small chips of soft-tissue samples from what would have once been densely feathered regions of the animals' bodies, then scanned the samples under an electron microscope so the fossils could be compared in detail to similar flakes taken from modern birds.

Like human dandruff, the fossilized skin flakes contained tough cells called corneocytesand were loaded with a protein called keratin. The researchers wrote that this fossilized dandruff was almost identical to that of modern birds and indicatedthat dinosaurs clearly shed their skin in flakes, rather than in one continuous chunk like a modern snake or lizard might.

Gross as it sounds, this dino dandruff reveals some key details about the mysterious period in Earth's history when animals first grew feathers, the authors wrote. The fossilized flakes indicate that as birds and dinosaurs first evolved feathers millions of years ago, their skin also evolved to cope with the feature.

"There was a burst of evolution of feathered dinosaurs and birds at this time [the Jurassic], and it's exciting to see evidence that the skin of early birds and dinosaurs was evolving rapidly in response to bearing feathers," McNamara said in a statement.

One crucial difference between the old dandruff and the modern stuff: In today's birds, corneocytes are distributed loosely among lots of intracellular fat, which helps facilitate cooling when a bird's body temperature rises during flight. The dino dandruff was much more densely packed with corneocytes, suggesting that dino skin needed less cooling and maybe that Microraptors never fully adapted to flight. Further study (and lots more dandruff) is needed to find out for sure.