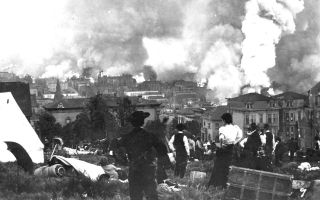 People overlook downtown San Francisco as fires roar across the city after the 1906 earthquake. This quake was likely a magnitude 7.9 and ruptured 296 miles (476 kilometers) along the San Andreas fault.
(Image: © Smith Collection/Gado/Getty)

Northern California's Hayward Fault is often called the most dangerous fault in America: It's the country's most urbanized fault, meaning an earthquake there has the potential to cause significant destruction, according to the U.S. Geological Survey.Geologists say earthquakes happen there about every 160 years, and the last big quake on the fault happened 150 years ago, in 1868.Meaning we're due.

But are we, really? How accurately can researchers predict when an earthquake is expected to strike?

The answer is less straightforward than many people might think. Forecasting an earthquake's approximate date assumes earthquakes follow some kind of pattern — that faults release pressure in a predictable way. But the more scientists look at faults, the less this seems to be true. In fact, most experts now say it's impossible to guess where the next "big one" will occur. [Image Gallery: This Millennium's Destructive Earthquakes]

"[In] some places, the Earth might be well enough organized that we get this more or less regular behavior, and in other parts, it's completely random," said William Ellsworth, a geophysicist at Stanford University who has spent decades looking for patterns in faults that might help engineers prepare for the big one. "It gets messy once you move away from these simple, well-behaved parts of the fault."

Take the San Andres Fault, the famous 750-mile-long (1,200 kilometers) fault that runs through California. One of the "well behaved" sections of this fault lies in the town of Parkfield, in central California. Parkfield played host to the world's largest earthquake forecasting experiment more than 20 years ago. In 1985, experts looked back at a series of large quakes that struck the region — in 1857, 1881, 1901, 1922, 1934 and 1966 — and predicted that another would hit before 1993 and that the pressure would bend the ground around it beforehand, as it had in past earthquakes.

Scientists descended on Parkfield to set up monitoring equipment, but 1993 came and went without shaking. Eleven years later, in 2004, a magnitude-6.0 quake hit Parkfield without warning. Critics say this proves that earthquakes are fundamentally unpredictable. Others, like Ellsworth, say the prediction was still pretty close, in geologic time. He says the problem is that seismologists need to think on the scale of 50 years, not five, no matter what previous earthquake patterns suggest.

Also, it's not clear which is more likely to rupture — a fault that regularly breaks or one that hasn't broken in a long time. Many scientists in Mexico say the Guerrero Gap — a fault line on the country's southwest coast — hasn't broken in a while and is due to rip, which could potentially devastate the coast and Mexico City. On the other hand, the fault may just have found other, quieter ways to release pressure — for instance by so-called silent earthquakes, which are slow-moving tectonic shifts that barely ripple the Earth's surface.

The same question applies to the U.S. Pacific Northwest, which may be due for a massive magnitude-9.0 earthquake because it has been relatively calm for about 300 years. Or maybe not. Scientists still don't agree on whether earthquakes are inherently predictable, but one thing there is consensus on is that we won't be able to do it accurately anytime soon.

"Earthquakes are going to be extremely difficult to predict with any type of short-term prediction," Ellsworth told Live Science. "That may just simply be beyond our reach."