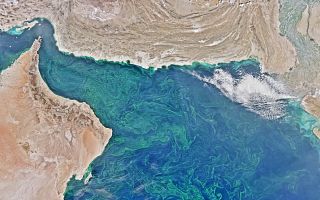 A massive "dead zone" in the Arabian Sea is the largest in the world, a new study reveals.

Dead zones are oxygen-starved ocean regions where few organisms can survive. They emerge in ocean depths ranging from 650 to 2,600 feet (200 to 800 meters), when influxes of chemical nutrients — typically from human pollution — spur algae growth, which sucks up oxygen. A significant oxygen-deprived region has bloomed in the Gulf of Oman for decades, but it was last surveyed in the 1990s.

Recently, researchers returned to the Gulf of Oman and found that the dead zone has expanded far more than expected, raising serious concerns about the future of local fisheries and ecosystems, researchers reported in a new study. [Dead Zones: Devil in the Deep Blue Sea]

"The ocean is suffocating," study lead author Bastien Queste, a marine biogeochemist and research fellow with the School of Environmental Sciences at the University of East Anglia in England, said in a statement. "All fish, marine plants and other animals need oxygen, so they can't survive there."

The Gulf of Oman, which spans 70,000 square miles (181,000 square kilometers), connects the Arabian Sea to the Persian Gulf. It has long been off-limits to researchers because of the region's political instability and the threat of ocean piracy.

But a duo of diving submarines, called Seagliders, recently allowed scientists to explore the dead zone remotely. The slow-moving autonomous underwater vehicles (AUVs) are small and lightweight, and while they use very little power they are capable of traveling thousands of kilometers and reaching depths of about 3,300 feet (1,000 meters), according to the manufacturer's website.

For eight months, these AUVs gathered data on oxygen levels, then transmitted their readings to the scientists via satellite. Researchers then used computer models to visualize the ocean currents that circulated oxygen around the gulf from the Arabian Sea. They found that the oxygen-poor region had grown dramatically, and the scant oxygen formerly held in the depleted zone — based on data from the 1990s — had drained significantly, leaving bigger areas with no oxygen at all.

The change was far bigger than existing computer models predicted, the study authors reported. Accelerated oxygen loss could partly be explained by climate change, as warmer ocean waters near the sea surface hamper the retention and circulation of oxygen, Queste said in the statement.

The Arabian Sea is home to many fish species, including several that are tolerant of low-oxygen conditions, according to the study. But the researchers' findings reveal that oxygen depletion in the Gulf of Oman is far worse than they imagined — and that isn't just an issue for sea creatures, Queste said.

"It's a real environmental problem, with dire consequences for humans, too, who rely on the oceans for food and employment," Queste said.

The findings were published online April 27 in the journal Geophysical Research Letters.