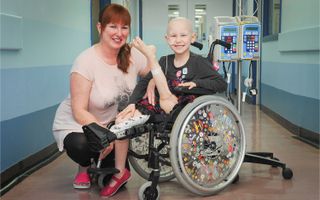 Seven-year-old Amelia Eldred had an unusual procedure, called rotationplasty, to treat her bone cancer. During the procedure, part of her leg was amputated and reattached backward. Above, Amelia with her mother, Michelle.
(Image: © Richard T. Harris/BPM Media)

When Amelia Eldred, an active 7-year-old in England, needed her leg amputated to treat bone cancer, doctors performed an unusual surgery: They removed the middle part of her leg and then reattached the lower part of her leg — but backward.

While the surgery sounds odd — it results in a foot that's at knee height, facing the back of the body — doctors say it can allow children to have a more active lifestyle and better leg function, compared with other treatment options, such as a full-leg amputation. In this case, Amelia's backward foot acts as a knee joint.

"Straight away, it was the best option for us," Amelia's mom, Michelle Eldred, told the BBC. With a lower-leg prosthesis, the girl will be able to do all the things she loves to do, including dancing and sports. But with a full-leg amputation, she would be unlikely to have a good range of movement, Eldred said. [27 Oddest Medical Cases]

The surgery that Amelia received is a rarely performed procedure known as rotationplasty, which is used to treat bone tumors that occur near the knee, according to the Dana-Farber/Boston Children's and Blood Disorders Center. In this case, Amelia was diagnosed with osteosarcoma, the most common type of bone cancer in children, which caused an aggressive tumor in her left femur (thighbone), according to the British news outlet Birmingham Live.

In an operation of this type, doctors first remove the middle section of the leg, which includes the bottom of the femur, the knee and the upper tibia. Then, they take the remaining portion of the lower leg, rotate it 180 degrees and reattach it to the femur. The foot is turned backward, so it can function as a knee joint, according to Dana-Farber/Boston Children's.

"This is a good alternative to allow them to be very functional with modern prosthesis use," Mayerson told Live Science.

Rotationplasty is most often performed on children under age 12, who are generally better at retraining their brains to use their ankle as their knee joint, according to Dana-Farber/Boston Children's. In addition, young children still have a lot of growing to do, which can make other treatment options for bone cancer more challenging.

For example, a procedure called limb-salvage surgery can be used to treat osteosarcoma, but that technique requires doctors to replace a section of the patient's bone with a metal implant or a cadaver bone. These materials don't grow with the child, though, so a young child will need multiple surgeries to make the limb longer so that it can grow with the child, Mayerson said. In contrast, with rotationplasty, "most of the time, it's one surgery, and you're done," he said.

Another advantage of rotationplasty is that it allows children to maintain a very active lifestyle, including allowing them to participate in high-impact activities, such as running and jumping, which wouldn't be possible with limb-salvage surgery, Dana-Farber/Boston Children's said. Patients who have rotationplasty also avoid the phantom limb pain that typically occurs with a traditional amputation, according to Stanford Children's Health, because the nerves in the lower leg are preserved.

Amelia was diagnosed with osteosarcoma in August 2017 and had several chemotherapy treatments before undergoing the rotationplasty surgery in January, according to Birmingham Live. A recent scan shows that Amelia's bones are fusing together well following the operation, Birmingham Live reported.

Amelia "has shown real bravery and confidence in showing off her leg, even though it looks a bit different," Dr. Lee Jeys, a consultant orthopedic surgeon at the Royal Orthopaedic Hospital in Birmingham, England, who performed the procedure, said in a statement. "I'm glad that she'll be able to continue doing all the things a normal child can do, including sports and dancing."