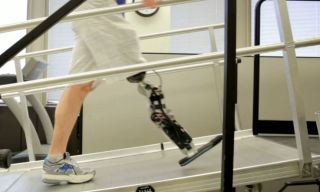 Zac Vawter, who lost his leg below the knee after a motorcycle accident four years, is the first amputee with a thought-controlled bionic leg.
(Image: © Rehabilitation Institute of Chicago)

A 32-year-old man who lost his leg below the knee after a motorcycle accident four years ago now has a robotic prosthesis he can control with his mind, according to a new report of his case.

While similar technology has allowed amputees to control bionic arms with their thoughts, Zac Vawter is the first amputee with a thought-controlled bionic leg, the researchers say.

The robotic leg — which decodes the electrical signals traveling through Vawter's remaining leg muscle — not only interprets the patient's intended movements, but also has a motor in the knee and ankle, which helps him push himself up stairs and perform other activities. [5 Crazy Technologies That Are Revolutionizing Biotech]

Using his robotic leg, Vawter can seamlessly transition between sitting, walking, and ascending and descending stairs and ramps, according to the report.

In contrast, most lower-leg prosthetics available today are passive, like a spring, which means people with those devices have to use their intact limb to pull the prosthetics behind them, said study researcher Levi Hargrove, of the Rehabilitation Institute of Chicago (RIC) Center for Bionic Medicine. And the lower leg prosthetics that do have motors are either controlled by a remote, or require the patient to perform exaggerated movements (like kicking their leg very far back) before changing activities, Hargrove said. [Video: Robotic Leg Prosthesis Controlled with Thoughts]

Vawter said his thought-controlled robotic leg "responds much more appropriately to the environment, and where I want to go, and how I want to walk."

For example, when wearing a conventional prosthetic and walking up stairs, he has to put the same foot first on each step he climbs. "Whereas with this leg, it's more so that I just interact with my environment how a normal person would," and can walk up stairs foot over foot, he said.

While more needs to be done to improve the technology, the researchers hope to have it available in clinics within five years.

When a person thinks about moving their lower limb, a signal from the brain is sent down the spinal cord and through nerves to muscles in the leg, Hargrove said.

But when an amputation occurs, nerve signals that would have gone to the knee or ankle, for instance, aren't able to deliver their message to muscle. To overcome this problem, the researchers first performed a surgery on Vawter to redirect his nerve signals, so that signals that would have gone to the lower leg instead go to the healthy hamstring muscle, in the top part of his leg.

Then, electrodes were placed on his leg to detect electrical signals from the muscle contractions. A computer program decodes the signals to interpret the patient's movement. Mechanical sensors on the robotic leg (including an accelerometer and a gyroscope) also collect data to help with control.

Using the robotic leg, Vawter was able to walk on level ground, go up ramps and stairs, and transition between these activities without stopping. He was also able to use his thoughts to change the position of his lower leg while sitting down, something that cannot be done with current motorized leg prosthetics (which must be moved manually when sitting down).

Using only the mechanical sensors, Vawter's robotic leg incorrectly interpreted his activity about 12.9 percent of the time. But by using information from the electrodes, this error rate dropped to 1.8 percent. Reducing this error rate is important, because it can help prevent falls, Hargrove said.

The researchers said they want to make the robotic leg smaller, quieter and stronger, and reduce the error rate further.

The study was funded by an $8 million grant from the U.S. Army, and the goal is to make this technology available to servicemen and women, as well as civilians.

"We appreciate the opportunity to sponsor this life-changing effort to provide military amputees with as much physical functionality as possible, as soon as possible," Col. John Scherer, director of the Clinical and Rehabilitative Medicine Program at the U.S. Army Medical Research and Materiel Command, said in a statement.

The study is published in the September issue of the New England Journal of Medicine.