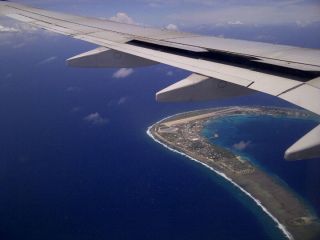 Orbital Science Corp.'s L-1011 aircraft "Stargazer" flies over the runway on Kwajalein Atoll, which is home to the island of Roi-Namur.
(Image: © NASA)

Low-lying, white-sand islands lined with palm trees and perched on tropical coral atolls are the stuff of vacation dreams. It's long been claimed that they will eventually disappear as the sea level rises because of global warning, but when that might happen has been unclear.

A study published Wednesday (April 25) in the journal Science Advances suggests the islands could become uninhabitable in as little as 40 years. However, other scientists vigorously contest the study's conclusions.

The study is based on an analysis of waves rolling up to a highly militarized island — that looks nothing like a vacation fantasy — called Roi-Namur on Kwajalein Atoll, in the Central Pacific's Marshall Islands. The research was funded largely by the U.S. Defense Department.

Atolls are made of tropical and subtropical coral that grew around the caldera of volcanoes as their rim sank into the sea. Coral and marine animals with calcium skeletons, ground up by the waves, eventually formed enough sand that waves pushing the sand onto reefs created islands. These started appearing around 5,000 years ago, and many were eventually colonized by Polynesians, Micronesians and Melanesians. [6 Unexpected Effects of Climate Change]

Curt Storlazzi, the paper's lead author, told Live Science that the biggest of these waves, thought to have reached great enough heights to wash over atoll islands every two or three decades in the past, will flood at least half of each island once a year when the sea level has risen by about 3 feet (1 meter). This could occur by 2105, according to some ice-melt scenarios modeled by the scientists, or as soon as 2055 under more pessimistic models involving ice-shelf collapse.

These calculations, Storlazzi said, would apply to atoll islands across the globe, or about 25,000 islands.

"There's nothing wrong with the waves washing over the islands per se," said Storlazzi, a geologist who studies waves for the U.S. Geological Survey at the University of California, Santa Cruz. "When it happens every 20 years, the communities have the time to recover from the effects of flooding." Afterward, rain washes away the salt that leached into the porous, sandy ground and refreshes the lens of fresh water that lies a foot or two below the island's surface and it floats above the seawater, he said. In other words, plants and people can survive.

But at the rate of once a year, Storlazzi said, the plants will die, the fresh water won't have time to return and people won't be able to repair the flooding damage to roads and homes — so they will simply leave.

Most atoll islands with be fine, study’s critic says

Paul Kench, head of the University of Auckland's School of Environment and a prolific author of studies on atolls, said the new study's analysis of the wave dynamics at Roi-Namur might apply to just half a dozen islands around the world — not to all of them. [8 of the World's Most Endangered Places]

"It's the waves washing over the islands that brought them to their present configuration," Kench, who wasn't involved in Storlazzi's research, said in a phone interview from New Zealand. "As the sea level keeps rising, the islands will rise too, and they will impede flooding events. So these are unlikely to become as frequent as predicted in this paper."

The research, he added, also ignores the responses of the atoll dwellers, who could build new structures on stilts and harness foreign aid to acquire solar-powered desalinators.

In February, Kench, with Murray Ford and Susan Owen, published a paper in the journal Nature Communications showing that the islands making up Tuvalu and their population had fared just fine as the Central Pacific sea-level rose nearly 6 inches (15 centimeters) in the past half century and that such resilience could be expected to continue. Another study by Kench and the same co-authors, this one published in 2014 in the journal Geophysical Research Letters, found that Jabat Island, in the Marshall Islands, emerged at a time when the sea was rising roughly as fast as it is today. Overall, he said, he has studied the evolution of at least 600 atolls, found that the vast majority have stayed the same or naturally increased in size, and he expects most of them to stay pretty much the same for the rest of this century.

In contrast to nearly all other atoll islands, Roi-Namur was thoroughly bulldozed during and after World War II for military purposes, Kench said. "The island has been so reconfigured that it's lost the ability to receive sand and grow," he added. Similar destruction has also compromised South Tarawa, the capital of Kiribati, where 60,000 people are packed into 6 square miles (16 square kilometers) and are highly vulnerable to flooding.

Storlazzi, who insisted his findings apply to atoll islands all over the world, doesn't dispute that waves washing over a typical sand island will make it rise. But he explained that for this study of Roi-Namur, the team assumed the island would not rise at all.

Storlazzi explained that the model didn't account for island rise because the margin of error for such a prediction was too great. Plus, the growth "is only a tenth of the overwash thickness, so there will always be more overwash during large-wave events than the island can grow vertically to offset them," he said. It is precisely these events that will make life impossible on these atolls, he added.

In contrast, Kench and other geomorphologists say the record shows that, as the sea rises, the waves push up sand ridges on the beaches, thus preventing the rest of the island from being flooded. In addition, the new study didn't account for the vertical growth of the coral in the reef flats where the waves form. That means that if the sea level rose by 3 feet, the amount of water on these flats will be that much greater and the waves much bigger. However, coral does grow vertically in these flats as the sea level rises. How fast it will continue to do so remains unclear as hot-weather events kill more and more corals.

Kench added that the study highlighted the problems of islands with human-made modifications like seawalls, causeways and reclaimed land that have disrupted the natural mechanisms that have allowed the lightly populated or pristine islands to naturally adapt to sea-level rise.

Virginie Duvat, a professor of coastal geography at the University of La Rochelle-CNRS, in France, specializes in atolls. She agreed with Kench that all but the most disfigured atoll islands seem to be adapting well to sea-level rise so far.

But that doesn't mean the residents of these islands are guaranteed a bright future. "If we tip into a world that is getting warm very fast, I think there are going to be all kinds of combinations of phenomena that will interact in ways we can't begin to predict," Duvat told Live Science.

"For instance, if the corals start dying off en masseand can't recover, they might well keep producing sand to feed the beaches for another century, but the amount of accessible fish on the reef is going to crash, and people won't have enough to eat," she said. "Or soil salinization might kill off the coconut trees, which are the only source of cash for most people.

"You can't take current processes and expect to see them continue for a century," she added. "That's why I'm prudent."