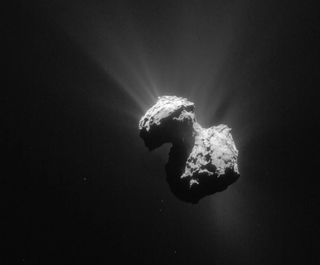 The Rosetta space probe's "rubber ducky" comet seems likely to have emerged from a gentle kiss in the cold black of outer space. And the comet might have a secret to tell about Neptune.

Comet 67P, where the European Space Agency (ESA) landed its Rosetta probe back in the summer of 2016, has a strange shape. It is fairly small, just about 2.5 miles (4.1 kilometers) at its widest point, and consists of two bulging lobes linked together by a narrow neck. In an unpublished paper awaiting peer review that appeared in the preprint journal arXiv, astronomers detailed how the comet may have formed and migrated into the orbit of Jupiter. And that history has important implications for the early history of the solar system, particularly for the planet Neptune, the researchers said. [Danger! Falling Rocks: Meteorites and Asteroids (Infographic)]

Astronomers don't have time machines; they can't travel to the past and see how 67P formed. But they can use the information they do have about the comet and our solar system to model the object's history. And that model has led to some fascinating conclusions about what the solar system looked like eons ago, when 67P likely formed.

The solar system is a roiling field of orbiting objects, tugging on one another with gravity. So, there are limits to how precisely astronomers can track 67P backward through time. Researchers already knew that the comet passed near Jupiter on Feb. 4, 1959, and Oct. 2, 1923. Peering further into the past, though, is much more difficult, the scientists said.

But by modeling dozens of paths that could have pointed the comet to its current position, the researchers concluded that the object likely moved into the inner solar system more than 1,000 years ago. That was after it formed and spent eons orbiting the sun 20 to 30 times farther away than planet Earth is located, in a giant cloud of rubble.

But that trajectory poses a problem, because unless 67P broke off from a larger comet, it almost certainly wouldn't have survived the version of the early solar system that scientists have long imagined, the researchers in the new study said.

Most histories of the early solar system have a disk of dust and rubble orbiting at 20 to 30 times Earth's current distance from the sun. In this cloud of material, billions of years ago, little clumps of dirt formed and banged into one another, sometimes clumping together into larger objects and sometimes falling apart.

In the most common version of this story, that cloud lasted about 400 million years. But the astronomers in the new study found that if that were true, 67P almost certainly wouldn't have survived. Over all that time, the comet would have smashed into other objects and fallen apart, the researchers said.

So 67P's survival lends credence to another hypothesis: Perhaps Neptune, which once orbited much closer to the sun, drifted out through that disk of matter soon after the disk formed 4.5 billion years ago. Neptune's drifting could have caused the disk to disperse, saving 67P from collisions in the rough and tumble environment of the rubble disk that spawned the comet, the new study said.

If Neptune's bulk absorbed or dispersed most of the rubble just 10 million years after the disk formed, that might explain how 67P survived to the present, the study said. Four-hundred million years? Deadly. But 10 million? That's a short enough span of time spent in the dirt cloud for 67P to have survived intact, the researchers wrote in their study.

The astronomers didn't offer a firm answer on how 67P itself was formed. It's possible, they wrote, that a mound of rubble just formed in its current, rubber-ducky shape from the beginning, though there are reasons to doubt that hypothesis.

The two lobes could also have resulted from two smaller comets orbiting one another, called a binary, coming together, and there are two possibilities for how that might have happened, the study said. Maybe a slowly orbiting binary brushed past a planet and got nudged into forming a single comet. Or maybe tiny collisions with other rocks pushed the two lobes together until they met.

A brush with a planet pushing the binary together, the researchers found, is unlikely. Such a close encounter with a planet would likely destroy most comets.

But maybe, out in that rubble cloud, pebbles bashed into the two orbiting chunks of 67P over and over. Each of those collisions would have sapped a bit of energy from the binary orbit, slowing the orbiting chunks down, the study said.

The pieces would have already been moving pretty slowly, the authors wrote. The lightweight lobes of 67P would have orbited one another at just a few feet per second back then. As the chunks experienced collisions, that speed would have dropped over time, until the pieces came together relatively gently.

It seems very likely, then, that Rosetta's comet formed in this billions-of-years-old kiss, the two lobes locking together and drifting a long way through space before arriving in a spot where humans could reach out and touch them.