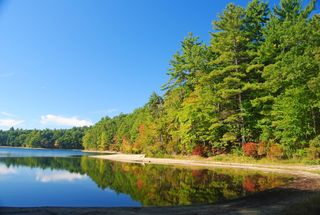 Scenic Walden Pond (above) transformed into a tourist attraction in the 1920s. Since then, human activity (including swimmers peeing) has completely altered the ecosystem.
(Image: © Shutterstock )

"Things do not change," Henry David Thoreau wrote in Walden: or, Life in The Woods. "We change."

And sometimes, a new geology study adds, we change things by peeing in them.

In a new paper published Wednesday (April 4)in the journal PLOS One, researchers revisited Thoreau's nature retreat at Walden Pond in upper Massachusetts — now a thriving tourist destination — to find it much changed by human activity. According to a team led by researchers at Paul Smith's College in New York, a potent combination of climate change and, well, human urine has drastically altered Walden Pond's chemistry since the 1920s. [In Photos: World's Most Polluted Places]

In their new study, the researchers analyzed six sediment cores extracted from the muddy bottom of Walden Pond. From these 2-foot-long (0.6 meters) tubes of soggy Earth, the team pieced together a snapshot of the last 1,800 years of Walden's chemical and climate history.

The biggest clues came as corpses: particularly, the remains of microscopic algae known as diatoms and chrysophytes, whose glassy scales preserve extremely well in lake sediment. Phytoplankton like these form the base of several aquatic food chains and require sunlight to thrive. By counting the number of scales left behind at various levels of the sediment cores, the researchers determined how much sunlight reached the bottom of the pond in a given year, allowing them to estimate the pond's water depth, clarity and chemistry over time.

From these samples, a clear pattern emerged. Phytoplankton populations have increased significantly in the pond since the 1920s, resulting in murkier, greener waters. These water-clouding algae need nutrients like phosphorus and nitrogen to survive, which means that this stuff was somehow filling Walden's waters. To explain this, the researchers pointed to human activity — one activity, in particular.

"During the early 20th century, water clarity [in Walden Pond] declined significantly due to a combination of factors, including shoreline development and inputs of human wastes," the researchers wrote in the paper. "More than half of the summer phosphorus budget of the lake may now be attributable to urine released by swimmers."

Indeed, tourists and swimmers started showing up to Walden in record numbers around the time of the pond's chemical shift. Though the site had been a popular recreation spot ever since Thoreau published his book, Walden Pond was established as a protected state reservation in 1922; beach and bathhouse facilities popped up along the pond's shores, and by the 1930s, "hundreds of thousands of swimmers used the facility in the summer," the researchers wrote.

Those visitors knocked soil into the pond as they trekked around newly built footpaths, inspired fresh deforestation and landscaping around the shore, and — as swimmers do — peed in the water. (As Yankee Magazine reported in 2008, Walden was thought to be among the most urine-filled of all of Massachusetts' 1,100 lakes and ponds.)

Simply put, more urine in the lake means more phytoplankton, which in turn means a cloudier and cloudier Walden. So, why does this matter? As Inverse reporter Yasmin Tayag pointed out, this chemical shift could result in big upstream ecological effects. If photosynthesizing plants at the bottom of the pond can't get enough sunlight, they will die; theoretically, the small organisms that feed on those plants would die next, and so on up the food chain.

Global warming may also play a role in the pond's ecological shift, the researchers wrote. Not only do warmer, longer summers result in more recreational use of the pond, but they also create conditions that favor the type of plankton "blooming" found near the pond's surface.

"Future warming and increased runoff from precipitation mean that nutrient inputs to many lakes must be reduced if they are to maintain the same ecological state they are in today," the researchers wrote. "It will therefore be prudent to further reduce the flow of anthropogenic [human-created] nutrients to Walden Pond under the warmer, wetter conditions that most climate models project for New England during the 21st century."

In other words, please — stop peeing in Walden Pond.