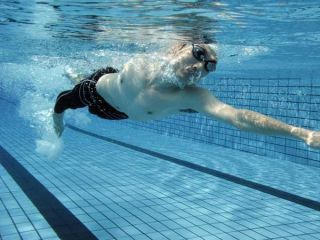 The best way for competitive swimmers to hold their fingers is to spread them slightly apart so they rake the water, a new study finds.

In the hunt for the technique that could bring the fastest freestyle swimming, previous research hinted that swimmers could improve their efficiency by spreading their fingers apart, but much remained uncertain how this might work and how much swimmers needed to spread their fingers to benefit.

To solve this mystery, fluid dynamicists investigated both virtual models of human arms in computer simulations and 3D-printed models of human arms in wind-tunnel experiments. They analyzed the forces that these models experienced at five different levels of finger spreading: At zero degrees of spread, where all the fingers were pressed together like a paddle, through progressively wider 5-degree intervals all the way to 20 degrees of spread. [The 4 Types of Exercise You Need to Be Healthy]

The best results were seen with 10-degree finger spreading in both computer simulations and wind-tunnel experiments, the researchers said.

The researchers explained that as fingers spread apart, some water slips through them. However, the resulting turbulence can limit the flow of water between the fingers. As such, slight finger spreading can effectively increase the surface area of a hand. Up to a certain point, the benefit from this effective boost in surface area outweighs the effect of water lost between the fingers, said study co-author Josje van Houwelingen, a swimming fluid dynamicist at the Eindhoven University of Technology in the Netherlands.

In the study, even 5-degree finger spreading reduced the amount of drag that arms experience by 2 percent in computer simulations and 5 percent in wind-tunnel experiments.

Although these effects are subtle, they could make a big difference in races between elite swimmers. "When you are a top swimmer, this very small effect, only a few percent, can make the difference between a gold medal and no medal at all," van Houwelingen said in a statement.

"We made a rough, and a little bit exaggerated, estimate for the possible improvement on the 50-meter freestyle," van Houwelingen said. "This resulted in a 0.6-second improvement." In contrast, she noted that the time difference between first and sixth place at the woman's 50-meter freestyle final at the 2016 Summer Olympics in Rio de Janeiro was just 0.12 seconds. [10 Biggest Doping Scandals in Olympics History]

Van Houwelingen noted that she was a swimmer herself, and tried the raking technique during swimming. She found it difficult to keep her fingers spread a constant distance from each other, "but since elite swimmers can also optimize their starting position up to 1 degree, they most probably also can also apply something of this knowledge to their technique."

The researchers noted that their research involved arms moving somewhat unrealistically at constant speeds through fluids. They now plan to put 3D-printed arms in a big water tank and see what forces they experience when they perform more realistic swimming movements using a robot. [Infographic: Body Types of Olympic Athletes]

The scientists detailed their findings Monday (Nov. 21) at the annual meeting of the American Physical Society's Division of Fluid Dynamics in Portland, Oregon.