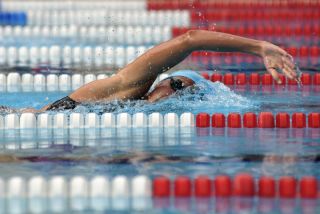 Success in the pool is all about fluid dynamics. Here, Zsuzsanna Jakabos swims at the Hungarian Country Championship on June 18, 2008 in Kaposvar, Hungary.
(Image: © muzsy / Shutterstock.com)

Seventeen-year-old swimmer Missy Franklin has already captured one gold medal in the 2012 London Olympics, winning the 100-meter backstroke. She'll aim for gold again Friday (Aug. 3) in the 200-meter backstroke. To succeed, she'll simply need to take advantage of the lessons of fluid dynamics.

"It's conceptually the exact same problem as an aerodynamicist studying the design of an airplane," said Timothy Wei, an engineer at the University of Nebraska, Lincoln, in an interview with the National Science Foundation. To maximize her speed, Wei said, Franklin and other Olympic athletes have to maximize their thrust and minimize their drag.

"Thrust is what pushes the swimmer forward, and drag is the resistance of the water to the motion of the water," Wei said.

Franklin, who stands 6-foot-1, has the advantage of long limbs and strong shoulders to push her through the water, maximizing her thrust. [Video: Where Missy Franklin Gets Her Speed]

The main source of drag is the friction of the water moving over a swimmer's body, Wei said. Drag also occurs when a swimmer's head pushes a wave of water in front of them, creating a wall they have to swim through. A third type of drag, called pressure drag, happens when water flowing around the swimmer causes more pressure at the head than at the foot.

"What you end up with is there's a pressure differential between the front and the back, so that is a force which is pushing the object backwards," Wei said.

Olympic pools are built to minimize the turbulence in the water caused by swimmers, helping the competitors go faster.

Franklin's broad hands and large feet (she wears size 13 shoes) also help propel her through the pool. But the swimmer says there's more than physics behind her wins.

"Being in the water is just is so natural for me, and it comes like walking on land," she told the National Science Foundation. "I absolutely love what I'm doing, and I think that gives me a huge advantage."