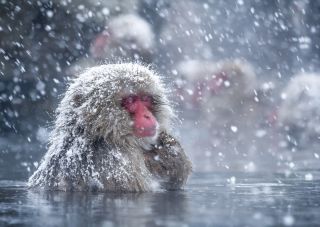 Japanese macaques, or "snow monkeys," have been spotted taking baths in man-made hot springs during winter for decades. Now, researchers have discovered exactly why the monkeys do this.

The results are not exactly Earth-shattering: The monkeys are cold.

But the researchers also found that indulging in a hot-spring bath may lower the monkeys' levels of biological stress.

"This indicates that, as in humans, the hot spring has a stress-reducing effect in snow monkeys," study lead author Rafaela Takeshita, of Kyoto University in Japan, said in a statement. "This unique habit of hot spring bathing by snow monkeys illustrates how behavioral flexibility can help counter cold-climate stress," Takeshita said. [Image Gallery: Sneezin' Snub-Nosed Monkeys]

The study was published Tuesday (April 3) in the journal Primates.

Japanese macaques (Macaca fuscata) live the farthest north of any species of nonhuman primate in the world. They are especially adapted to living in the cold; they grow thicker and longer fur in the winter.

But in 1963, a female Japanese macaque living in Jigokudani Monkey Park in Nagano, Japan, was seen bathing in an outdoor hot spring belonging to a nearby hotel, and other monkeys soon copied this behavior, the researchers said. As you might imagine, a bunch of monkeys bathing in a hot spring meant to hold people was not exactly hygienic, so the park management built a new hot spring just for the monkeys. By 2003, about a third of the Japanese macaques living in this park regularly bathed in the hot spring in the winter. The bathing monkeys are now a popular tourist attraction.

The bathing monkeys seemed to be bathing to stay warm, but scientists had no physiological data to support this hypothesis, they said.

In the new study, the researchers collected data from 12 adult female monkeys in Jigokudani Monkey Park between April and June, and again from October to December. They examined how much time the monkeys spent in the hot spring, and also analyzed fecal samples for "fecal glucocorticoid," a metabolite linked with levels of biological stress in monkeys.

The researchers found that female snow monkeys did indeed use the hot spring more often in the winter than in the spring, especially during colder weeks.

In addition, during the winter months, the monkeys had lower fecal glucocorticoid levels during the weeks that they bathed, compared with the nonbathing weeks.

The researchers also found that dominant females spent the most time bathing — a benefit of their status — but they were also involved in more aggressive conflicts, resulting in higher energy use and stress levels compared with lower-ranking females. So the dominant females experienced a trade-off between the costs of their high rank and the benefits of the hot spring, the researchers said.

The researchers concluded that hot-spring bathing is an "opportunistic tradition that provides physiological benefits to the monkeys."

The researchers now want to study blood or saliva samples from the monkeys to see if these samples show any other short-term changes in stress levels tied to bathing.