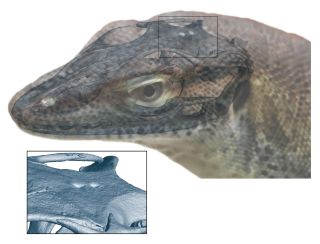 An artist's interpretation of the extinct monitor lizard, including the two extra "eyes" on top of the creature's head, shown in the inset box.
(Image: © Senckenberg Gesellschaft für Naturforschung/Andreas Lachmann/Digimorph.org)

About 49 million years ago, a long-tailed monitor lizard perceived the world not with two but with four eyes, a new study finds.

The all-seeing lizard, called Saniwa ensidens, is the first jawed vertebrate on record to sport four eyes, the researchers said. These days, the jawless lamprey is the only known four-eyed creature with a backbone.

S. ensidens' third and fourth eyes sat on top of its head, where the lizard's pineal and parapineal organs were located. These eye-like photosensory structures also played a role in orientation and in circadian and annual cycles. [Image Gallery: 25 Amazing Ancient Beasts]

The eye-grabbing discovery is helping researchers understand the evolutionary history of the pineal and parapineal organs in vertebrates, the study's researchers said.

"On the one hand, there was this idea that the third eye was simply reduced [disappeared] independently in many different vertebrate groups, such as mammals and birds, and is retained only in lizards among fully land-dwelling vertebrates," study lead researcher Krister Smith, a palaeoanthropologist at the Senckenberg Research Institute in Germany, said in a statement. "On the other hand, there was this idea that the lizard third eye developed from a different organ, called the parapineal, which is well-developed in lampreys. These two ideas didn't really cohere."

The newfound eyes in S. ensidens help clear up this mystery.

"By discovering a four-eyed lizard — in which both pineal and parapineal organs formed an eye on the top of the head — we could confirm that the lizard third eye really is different from the third eye of other jawed vertebrates," Smith said.

Smith and his colleagues made the discovery by taking a second look at two museum specimens of S. ensidens that were collected almost 150 years ago at Grizzly Buttes in Bridger Basin, Wyoming. The researchers popped the 4.3-foot-long (1.3 meters) lizard remains into a computed tomography (CT) scanner, which takes thousands of X-rays and then assembles them into 3D digital images.

The CT scans showed that the ancient monitor lizard, which went extinct about 34 million years ago, had spaces in its skull where a fourth eye would have sat, a finding that "I certainly did not expect!" Smith said.

The discovery reveals that the pineal and parapineal glands weren't paired like eyes in modern-day vertebrates. Moreover, the finding indicates that the third eye in lizards evolved independently of the third eye seen in other vertebrate groups, the researchers said.

However, despite the organs' photoreceptive abilities, there's "nothing mystical" about the pineal and parapineal organs, Smith said. Rather, these organs help some lower vertebrates sense light and orient themselves geographically, he said.

The study was published online today (April 2) in the journal Current Biology.