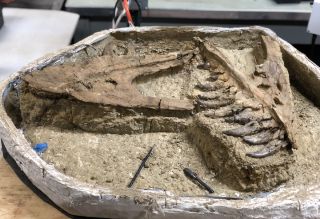 The remains of what is likely a juvenile T. rex were discovered in Montana's Hell Creek formation.
(Image: © David Burnham)

Paleontologists digging in Montana have hit the dinosaur jackpot. They've uncovered what appears to be an elementary-school-age Tyrannosaurus rex, they announced Thursday (March 29).

The researchers found the fearsome beast's remains in Montana's famous Hell Creek formation, a rocky expanse chock-full of dinosaur-age fossils. Despite the site's rich assemblage, the past 100 years have yielded fewer than five "decently complete juvenile T. rexes," said Kyle Atkins-Weltman, an assistant fossil preparator at the Biodiversity Institute and Natural History Museum at Kansas University, who is helping prepare the tyrannosaur.

Of all the juvenile T. rexes from Hell Creek, "this is probably the most preserved and most complete," Atkins-Weltman told Live Science. "This is a 1-in-100-million specimen." [Photos: Dinosaur's Battle Wounds Preserved in Tyrannosaur Skull]

Kris Super, an assistant student preparator also at the Natural History Museum, found the young T. rex's fossils in June 2016. But his team only had time to unearth the dinosaur's ilium (the upper part of the pelvic bone), so they weren't sure what species it was until they returned the following summer and dug up its recognizable teeth and skull.

This dinosaur, as well as other fossils recovered from the same spot at Hell Creek, will keep its discoverers busy for a while, David Burnham, a preparator of vertebrate paleontology at the Biodiversity Institute, told Live Science. The rock slabs they excavated also include a nearly complete turtle and pieces of fish and other dinosaurs. They even found the jaw of a placental mammal, Burnham said.

These prehistoric animals likely died in a "quick, cataclysmic event," Burnham said. "The storms were huge because the temperatures were warmer."

"We would suspect [it would have been] maybe 6 to 7 years old, possibly 8," Atkins-Weltman said.

"By the time they were 4 years old, they were the size of some of the largest land predators that are around today," Atkins-Weltman said. "It's literally hard to fathom an animal growing this fast because there's really nothing quite like it in the modern world."

Paleontologists are still excavating the dinosaur's bones from a rock slab, but so far they've found both of its upper jaw bones with all of the teeth intact (some of them 2 inches, or 5 centimeters, long), as well as pieces of the tyrannosaur's foot, hips, backbones and its roughly 25-inch-long (65 cm) skull.

The researchers cautioned that although it looks like a juvenile or sub-adult T. rex, more work is needed before they can say so for sure. [Photos: Newfound Dinosaur Had Tiny Arms, Just Like T. Rex]

Is it a Nanotyrannus?

Whenever a young T. rex is found, there are murmurs in the background about whether the bones belong to a Nanotyrannus. That's because sleek, baby T. rexes look so different from humongous adult T. rexes that some researchers thought they were a different species, said Thomas Carr, a vertebrate paleontologist and an associate professor of biology at Carthage College in Wisconsin, who is not involved in the new finding.

In the 1940s, a small tyrannosaur specimen was discovered and named Gorgosaurus lancensis. A later examination of the specimen, housed at the Cleveland Museum of Natural History, found it was an entirely new genus, dubbed Nanotyrannus.

However, when Carr reviewed the controversial fossil for his master's thesis, published in the Journal of Vertebrate Paleontology in 1999, he found that it had features seen in other juvenile tyrannosaurs. "And on top of that, it has unique features only seen in T. rex, like the wide forehead, the narrow snout and the eye sockets that face somewhat forward rather than to the side," Carr told Live Science, referring to that G. lancensis.

"So, the simplest explanation, the most parsimonious hypothesis, is that it's a sub-adult T. rex," Carr said. In other words, if Nanotyrannus exists, researchers haven't found one yet.

But, given that the world is filled with countless and strange dinosaur fossils, Burnham and his colleagues aren't ruling out anything.