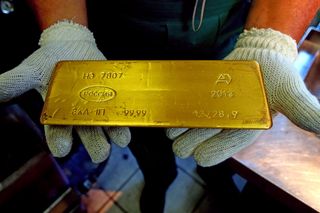 For a few glorious minutes on Thursday (March 15), the gray skies of Siberia were filled with gold.

Unfortunately, that gold was falling out of an airplane.

The plane — a Cold War-era cargo aircraft called the Antonov An-12 — had just taken off from Yakutsk Airport in Siberia, carrying an estimated $378 million in gold, platinum and diamonds on behalf of a private mining company. According to The Siberian Times, the plane's cargo hatch tore open during takeoff, so the plane spilled nearly 200 gold bars (weighing a total of 3.4 tons, or 3 metric tons) into the air.

While most of the wayward ingots immediately landed on the Yakutsk Airport runway, the plane continued flying another 10 miles (16 kilometers) to make an emergency landing at the nearby Magan Airport, dropping cargo along the way, The Siberian Times reported.

Nobody was reported injured following the golden incident, and most of the spilled treasure has since been recovered, according to a police spokesperson.

The cause of the incident is being investigated. According to an official statement from the Yakutsk Airport, the wind tore off part of the plane's cargo hatch during takeoff (photos taken at the scene seem to show chunks of the plane's fuselage ripped away and deposited in the nearby snow).

However, Russian transportation officials told the state-run TASS  news agency that blame might lie with the plane's maintenance crew, who may have improperly secured the cargo before takeoff. The maintenance crew has since been detained for questioning.

While solid bricks of gold and platinum are among the more dangerous surprises seen plummeting out of the sky lately (other oddities include boiled bats and frozen iguanas), they are also some of the more welcome treasures to turn up in the snows of Siberia. (Compare them, say, to a sack of 54 severed hands improperly disposed of by a local forensics lab.)

If you are attracted to the idea of living somewhere with frequent rains of precious gemstones, however, a more reliable bet might be the planets Uranus or Neptune; researchers think it might rain diamonds on those worlds year-round.