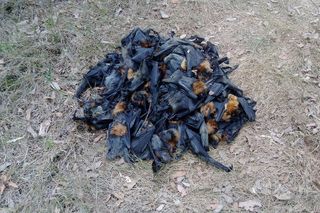 A pile of dead bats that "boiled" in Campbelltown in the Australian state of New South Wales.
(Image: © Help Save the Wildlife and Bushlands in Campbelltown)

More than 200 bats have lost their lives to southern Australia's ongoing heat wave.

As temperatures rose to 111.5 degrees Fahrenheit (44.2 degrees Celsius) in Campbelltown in the Australian state of New South Wales, a colony of flying fox bats that lives near the town's train station felt the effects. Volunteers struggled to rescue the heat-stricken bats, according to the Campbelltown-Macarthur Advertiser, but at least 204 individual animals, mostly babies, died.

"They basically boil," Kate Ryan, the colony manager for the Campbelltown bats, told the newspaper. "It affects their brain — their brain just fries and they become incoherent." [Watch for Falling Iguanas! Bomb Cyclone Drops Frozen Lizards]

Rescuers with Help Save the Wildlife and Bushlands in Campbelltown posted on their Facebook page details of the dire situation: "As the dead bodies were recovered and placed in a pile for a head count the numbers had reached 200 not including the many hundreds that were still left in trees being unreachable, sadly a few adults were also included in the body count. It was a long and heartbreaking afternoon..."

The colony of flying foxes in Campbelltown belong to the species Pteropus poliocephalus, better known as the gray-headed flying fox. Their wingspans can stretch more than 3.3 feet (1 meter), and they can weigh more than 2.2 lbs. (1 kilogram). Important pollinators, the bats eat mainly nectar, pollen and fruit.

Temperatures higher than 86 degrees F (30 degrees C) can be dangerous to young flying foxes, Ryan told the Advertiser, because their bodies lose the ability to regulate their temperature. For the Campbelltown colony, a lack of both water and shade exacerbates the problem, she said.

Southern Australia's heat has reached far beyond 86 degrees F in the past several days. Most of New South Wales is experiencing a severe heat wave, according to the Australian Bureau of Meteorology. On Jan. 6, a weather station in the Sydney suburb of Penrith recorded a reading of 116.78 degrees F (47.1 degrees C), the hottest in the Sydney metro area since 1939, when a nearby station recorded a temperature of 118.04 degrees F (47.8 C).

The most extreme heat is expected to abate in the coming days, though meteorologists said a lower-intensity heat wave will persist throughout much of the state of Queensland, northern New South Wales and southern Central Australia through at least Wednesday (Jan. 10).

Australia is no stranger to extreme heat, but climate change is tilting the odds toward more heat waves, said Gerald Meehl, the head of the climate change research section at the U.S. National Center for Atmospheric Research (NCAR).

"They're occurring under the framework of background temperatures being warmer, so a naturally occurring heat wave becomes more intense," Meehl told Live Science.

"That's projected to continue to increase," Meehl said. Australia's current heat wave echoes a similar one the continent experienced in 2013. According to the Australian Bureau of Meteorology, that summer set records for the warmest September to March, the hottest summer, the hottest month and the hottest day.