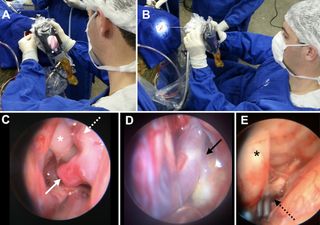 Brain surgeons in Brazil have begun attaching old iPhones to their endoscopes (panels A and B) to get a clearer view into patients' brains (panels C, D and E)
(Image: © Courtesy of the American Association of Neurological Surgeons)

But what if the doctor's smartphone was a crucial part of the surgical tool kit?

According to a new paper published today (March 13) in the Journal of Neurosurgery, brain surgeons in Brazil have begun attaching old iPhones to their surgical equipment to replace the bulky, expensive video cameras and monitors they typically use — and the doctors like it. [10 Weird Quirks of The Human Brain]

In fact, swapping in a smartphone made certain "minimally invasive" surgeries cheaper, more efficient, and easier to teach to rookie surgeons, the authors wrote. This phone-friendly method could even become a valuable workaround in countries whose infrastructure cannot support expensive medical equipment.

"Our initial goal was to reduce the cost of the neuroendoscopic video set," study co-author Mauricio Mandel, a doctor at the University of São Paulo Medical School, said in a statement."In the end, we came across a new, more intuitive and fluid method of performing these procedures."

Mandel and his colleagues tested their smartphone camera on a series of neuroendoscopy surgeries — essentially, procedures that involve cutting a small hole in the patient's nose, mouth or head and using an endoscope (a long, flexible tube) to feed a camera and other surgical tools through the incision.

Typically, these procedures require a long, thin video camera to slip through the endoscope and capture the view inside the patient's head. This video feed gets transmitted to a monitor standing by the side of the operating table, which the surgeons look up at (rather than looking down at their patient).

In the new study, the authors mounted iPhones (models 4, 5 and 6) onto their endoscopes using a special adapter. Using this apparatus, they performed brain surgeries on 42 patients. This setup allowed the surgeons to keep their focus down on the patient, looking at the phone screen rather than up at a monitor, for the duration of the surgery. Using the phone's built-in Wi-Fi, the surgeons streamed the live footage to a video monitor elsewhere in the room so other members of the team could watch.

According to the authors, all 42 surgeries were successful and no complications involving the smartphones occurred. What's more, once surgeons started using a smartphone-endoscope, they chose not to switch back to the conventional method.

Funny as it may sound, there are lots of advantages to integrating smartphones into surgeries, the authors said. According to the paper, the phone's high-definition display provided an "excellent view" of the surgical site, and could be manipulated or enhanced in real time via the touch screen. Smartphones are cheaper and more portable than standard endoscopic video equipment, the authors added, and they don't require an external power source. If a surgery runs long, a surgeon can simply recharge the phone's battery without interrupting the procedure.

So, if your surgeon can't put down her iPhone, don't fret — it may be for the sake of a more streamlined surgery. If she's just using it to watch "Grey's Anatomy," however, you might have a problem.