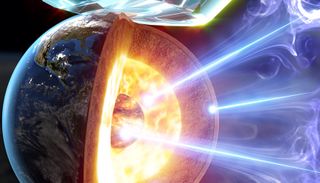 At the extreme temperatures and pressures deep within Earth's core, the noble gas xenon can react with metals like iron and nickel.
(Image: © Adam Connell/TID)

Earth's xenon is missing. But a new experiment suggests it might have been right under our feet all along.

Earth's atmosphere contains less xenon than it should, at least based on studies of some of the oldest space rocks in the solar system. Carbonaceous chondrites contain the most primitive materials known in this planetary system. They're made of the same stuff that eventually coagulated to make the planet Earth. That's where the mystery comes in: Carbonaceous chondrites contain way more xenon than Earth and its atmosphere.

Xenon is a noble gas. And noble gases don't react very well with other elements, so Earth's missing xenon shouldn't have been used up in chemical reactions over the eons, Lawrence Livermore National Laboratory (LLNL) physicist Elissaios Stavrou said in a statement.

The case of the missing xenon

Trying to figure out where it went, Stavrou and his colleagues tested the hypothesis that the missing gas could be camped out in Earth's core. [6 Visions of Earth's Core]

"When xenon is squashed by extreme pressures, its chemical properties are altered, allowing it to form compounds with other elements," study researcher Sergey Lobanov, of Stony Brook University, said in a statement. In that way, it could remain hidden in these other compounds.

But could xenon react with the metals in Earth's core, even under pressure? Lobanov, Stavrou and their team tried to get the noble gas to react with nickel and iron, two metals that make up much of the core, at pressures 2 million times that of Earth's surface and at temperatures exceeding 2,000 kelvins (3,140 degrees Fahrenheit or 1,727 degrees Celsius). They used X-ray diffraction and Raman spectroscopy — two techniques that use X-rays and laser light to determine the chemical makeup of a compound — to tell if the nobel gas and metals were reacting. They were.

"In spite of our intentions, Elis [Stavrou] and I were floored when, at the X-ray beamline, a clear signature of a reaction between iron and nickel with xenon was signaled by the diffraction pattern," study co-author Joe Zaug, a physical chemist at LLNL, said in a statement.

The study is the first-ever demonstration of a noble gas reacting with a metal, Stavrou said. Under extreme pressure and heat, the team found, iron and nickel become very electronegative, meaning they had a strong affinity for snatching any electrons that should stray into their orbit. Their electronegativity was so strong, it even grabbed electrons from a gas as stable as xenon. [Earth's 8 Biggest Mysteries]

As intriguing as it was to discover new extremes of chemical reactions, the researchers can't be entirely sure that they've solved the xenon mystery. Earth's core was not under such high pressures when the planet first formed from scattered space material, study co-author Alexander Goncharov, of the Carnegie Institution for Science in Washington, D.C., said in a statement.

It's possible, however, that the lost xenon somehow became trapped in the core and then reacted later, as pressures rose.

"There are many more systems and paradoxes to solve," Stavrou said. "We look forward to writing new chapters about extreme physico-chemical phenomena."

Editor's Note: This article was updated to correct the affiliation of Alexander Goncharov.