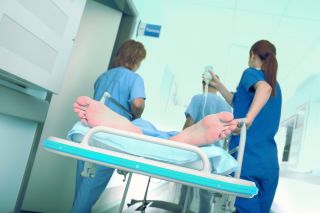 Emergency rooms around the U.S. are crowded with flu patients as the country experiences one of the most intense flu seasons in years, according to news reports. But if you do catch the flu, how do you know if you need to go to the ER?

Most patients with the flu will recover on their own without medical care. But in some cases, the flu can be life-threatening, and so it's important to know how to recognize signs of a flu emergency, according to the American College of Emergency Physicians (ACEP).

"Most people with flu typically do not require emergency care, but this season's disease strain is much more active than previous years," Dr. Paul Kivela, president of ACEP, said in a statement. "Public health experts project that tens of thousands of people could suffer flu-related deaths." (Health officials estimate that since 2010, the number of yearly flu deaths in the United States has ranged from 12,000 to 56,000.)

"If you have emergency warning signs or complications, go to the nearest emergency department immediately," Kivela said. [6 Flu Vaccine Myths]

According to ACEP, signs that the flu requires emergency care for adults include:

In children, emergency symptoms include:

More common, nonemergency symptoms of the flu can include fever and chills, cough, sore throat, runny nose, headache or body ache, fatigue, vomiting or diarrhea, according to ACEP.

If you develop flu-like symptoms but have a nonemergency illness, you should first seek help from your primary care doctor or an urgent care center, ACEP said.  If you go to the ER and you don't actually have the flu, you could catch it from others who have it, according to the Centers for Disease Control and Prevention (CDC).

Indeed, in a recent viral video, a Florida nurse warned people not to go to the ER if they are healthy or don't have emergency symptoms, because of the risk of catching the flu. "If you don't have what I call a true emergency, this would not be the time to come to the emergency room," Katherine Lockler said in the video.

Other tips to avoid catching the flu this season include washing your hands often, avoiding direct contact with ill people and getting a flu shot, Kivela said." Even though the flu shot is less effective this year, it still can reduce your risk of getting the flu and having serious complications," Kivela said.

People who are at high risk for flu complications include young children, people ages 65 and over, pregnant women and people with chronic conditions, according to the CDC. If people in this "high-risk" group develop flu-like symptoms, the CDC recommends that they should receive treatment with antiviral medications early in the course of their illness. To ask about receiving these treatments, people can contact their health care provider rather than go to the ER if they do not have signs of a flu emergency, the CDC said.

People can also avoid spreading germs by covering their mouth when they cough, washing their hands and staying home from work, school or other activities when they aren't feeling well, Kivela said.