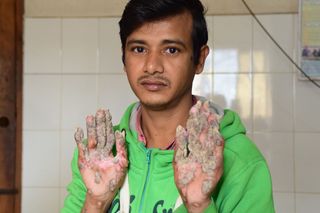 A photo of Abul Bajandar, also known as "tree man," take on Jan. 31, 2018. After 24 surgeries, the unusual growths on his hands and feet are starting to come back.
(Image: © Sam Jahan/AFP/Getty)

A patient in Bangladesh known as "tree man" underwent extensive surgeries last year to remove wood-like warts from his hands and feet. Now, however, he says the unusual growths are starting to come back.

The man, Abul Bajandar, had 24 surgeries over the past year to remove more than 11 pounds (5 kilograms) of growths from his body, according to the Agence France-Presse (AFP).

In January of last year, doctors were optimistic that Bajandar could soon leave the hospital and go back to his normal life. But he has spent the last 12 months in the hospital, where he has been living with his family, and his doctors now say his case appears more complicated than they initially thought, AFP reported.

"I am scared to have any more surgeries," Bajandar told the AFP. "I don't think my hands and feet will be okay again."  [27 Oddest Medical Cases]

Bajandar has a rare genetic condition called epidermodysplasia verruciformis, according to news reports. People with this condition are more susceptible to human papillomavirus (HPV) infections on their skin, according to a 2010 report of the condition.

In people with the condition, HPV infections lead to the formation of wart-like skin lesions, which can progress to malignant tumors in about 50 percent of patients, the report said.

Currently, there is no definitive cure for epidermodysplasia verruciformis, according to the 2010 paper.

In addition to surgery, treatment can include drugs called retinoids, which can curb cell growth and are sometimes used to treat skin conditions; and interferon, a protein produced by the body to fight viruses.

Some of these treatments may be helpful, but there is a wide variation in how patients respond to them, the paper said. Indeed, although there are quite a few treatment options, "none seem to be curative, and lesions usually recur after treatment cessation," the paper concludes.