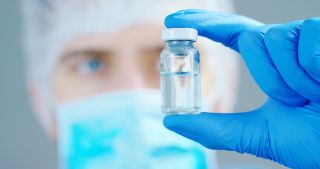 With more than a dozen different strains of influenza circulating the world at any given time, flu season is a bit like a box of chocolates: you never know what you're going to get.

That's one reason why you need a flu shot every year. Different flu strains are constantly adapting different ways of evading your immune system's defenses, and, so far, there is no single vaccine that can protect you from them all.

But scientists are making progress: A new vaccine candidate developed at the University of California, Los Angeles (UCLA), might bring researchers one step closer to universal flu protection. Engineered from multiple strains of the influenza virus, all of which have vulnerabilities to a specific type of protein in the immune system, the vaccine successfully protected test animals from two different strains of the flu in the lab. [The 9 Deadliest Viruses on Earth]

The basis for the new vaccine candidate lies in a component of the immune system called interferons. When your immune system detects an infection, interferons are among the first responders on the scene, according to the study, published today (Jan. 18) in the journal Science. True to their name, the main function of these antiviral proteins is to interfere with the spread of viruses. They do this by signaling the danger to surrounding host cells, turning on multiple protective genes to promote a swift immune response that will, hopefully, kill the virus, and help the immune system adapt to the virus for long-lasting protection.

"If viruses do not induce interferons, they will not be killed in the first-line defense, and without interferons, the adaptive immune response is limited," said seniorstudy author Ren Sun, a professor of molecular and medical pharmacology at the David Geffen School of Medicine at UCLA, in a statement. "For these reasons, viruses have evolved strategies to evade detection and limit the production of interferons by host organisms."

With this in mind, Sun and his colleagues spent four years researching the entire influenza genome in order to identify any mutations that either inhibit or enhance the host's interferon response. Previous studies showed that it was possible to disable individual genetic sequences responsible for blocking interferons, but Sun and his colleagues were determined to go further, targeting multiple interferon-blocking sites to inhibit the virus as much as possible.

This research entailed sequencing every amino acid in the influenza genome, and ultimately allowed the researchers to identify eight mutations that made various influenza genes particularly sensitive to interferons. They combined these eight mutations into a new, "hyper-interferon-sensitive" (HIS) strain of influenza that would, theoretically, stimulate a strong immune response in infected hosts. This new strain could become the basis of a broader, more effective flu vaccine, the researchers wrote. [7 Absolutely Horrible Head Infections]

A step toward universal protection

The researchers tested the vaccine on several lab mice and ferrets (common test subjects for influenza infection, the authors noted). The vaccine proved safe: "[Test subjects showed] no increase in copy number, no pathology, and no body weight loss or death with the vaccination," lead study author Yushen Du, a recent doctoral graduate at UCLA, told Live Science in an email.

Even more exciting, Du said, the vaccine also proved effective. When the test animals were injected with the vaccine, they produced potent immune responses when they were exposed to various strains of the flu. And while the vaccine was derived from an H1N1 strain of influenza, animals that were exposed to the H3N2 strain also showed an effective immune response — suggesting that the interferon-stimulating vaccine was doing its job.

The protective effects of the new vaccine are likely due to the generation of "cross-reactive T-cells" — immune cells that can "react with multiple viral strains," John Teijaro, an assistant professor in the Department of Immunology and Microbiology at The Scripps Research Institute, and Dennis Burton, co-chair of the same department, wrote in a commentary that appeared alongside the study in the journal Science. In other words, the vaccine appears to lead to the release of powerful T-cells that can fight off multiple strains of the flu.

"In addition to increasing [vaccine] safety, the use of mutations scattered throughout the viral genome should provide a barrier to the development of viral resistance," Teijaro and Burton wrote. This is important, because if a virus becomes resistant to a vaccine, the vaccine is no longer useful.

This new method of engineering viruses with specific immune vulnerabilities could be applied to other diseases besides influenza, according to the study. But despite this new success, many challenges line the path toward a universal flu vaccine. For one, the new study tested exposure to only two strains of flu — H1N1 and H3N2 — while many other dangerous strains remain. "It would be valuable to test additional viruses, including highly virulent avian subtypes such as H5N1 and H7N9, in subsequent studies," Teijaro and Burton wrote.

According to Du, the team will continue their research by extending the study to a type of flu virus called influenza B virus, which infects only humans, ferrets, and seals. "We are also thinking about performing large-scale animal tests before going into clinic trials [in humans] of the current vaccine strain," she said.