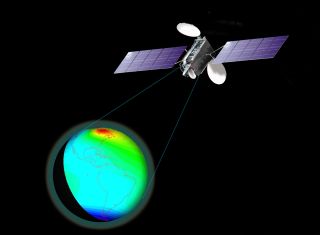 NASA's GOLD mission, riding to space with the SES-14 communications satellite, will study Earth's upper atmosphere from 22,000 miles above the planet.
(Image: © NASA)

A new NASA mission, the first to hitch a ride on a commercial communications satellite, will examine Earth's upper atmosphere to see how the boundary between Earth and space changes over time.

GOLD stands for Global-scale Observations of the Limb and Disk, and the mission will focus on the temperature and makeup of Earth's highest atmospheric layers. Along with another upcoming satellite, called ICON, GOLD will examine how weather on Earth — and space weather caused by the sun — affects those uppermost layers. [Earth's Colorful Atmospheric Layers Photographed from Space]

"For years, we've been studying the Earth's upper atmosphere — thermosphere and ionosphere — and we've been looking at those [layers] in detail from the ground and from low-Earth orbit missions," Richard Eastes, the principal investigator for GOLD from the University of Central Florida, said at the NASA presentation. "We wanted to be able to back off [to a higher orbit] and get the big picture, get a whole hemisphere at once. That lets us put things into context that we can't understand when we're just looking at one little piece."

GOLD, which will inspect the ultraviolet radiation that the upper atmosphere releases, will also be the first to take comprehensive records of that atmospheric layer's temperature, Eastes added. The satellite carrying GOLD will orbit 22,000 miles (35,400 kilometers) above Earth in a geostationary orbit, which means GOLD will stay fixed with respect to Earth's surface as the satellite orbits and the world turns. For comparison, the International Space Station cruises at about 250 miles (400 km) above the surface.

GOLD will pay particularly close attention to Earth's thermosphere, which is the gas that surrounds the Earth higher than 60 miles (97 km) up, and the layer called the ionosphere, which forms as radiation from the sun strips away electrons from particles to create charged ions. And although solar flares and other interactions on the sun do have a strong impact on those layers, scientists are learning that Earth's own weather has an impact on the layers, too.

"In the past, people thought that this region of the Earth's upper atmosphere was affected primarily by what's happening at the sun and what's coming to the Earth from the sun," Sarah Jones, GOLD mission scientist at Goddard, said during the presentation. The sun's radiation and charged particles of solar wind hits Earth's atmosphere, and in response, the planet's magnetic field can cause geomagnetic storms and other space weather. "However, in about the last 10 years or so, there's been this growing body of evidence that the upper atmosphere is also affected by what's going on below.

"For example, tsunamis create waves in the air, and those waves move upwards, and the waves could potentially cause changes even at the very boundary between the Earth and space," she added. "GOLD is studying in particular how to tease out the effects coming from the sun above and Earth below."

Being able to model the region accurately is particularly important, the researchers said, because the ionosphere affects radio and GPS technology as well as spacecraft. Right now, changes can be observed only every several hours, and models of the upper atmosphere can predict only about a day of changes. GOLD will be able to monitor how the upper atmosphere changes and evolves throughout the day on an hourly basis so researchers can build better models.

The ICON (Ionospheric Connection Explorer) spacecraft, which will launch later in 2018, will add another dimension to the understanding researchers gain with GOLD: Rather than taking the far-off view, ICON will fly through the upper atmosphere in low-Earth orbit — 350 miles (560 km) — to get a much closer view of what's going on.

"The cool thing about the combo between ICON and GOLD is the fact that we're getting this global view that's actually remote sensing, and then we have the in situ view, [where] we're actually sending something through it," Alex Young, the associate director for heliophysics science at Goddard, said during the presentation. Using the two together, researchers can pin down exactly what causes changes to the boundary between Earth and space, to better understand the impact it will have below — and above, Young said.

"Not only is it telling us about fundamental science, which is pertinent not just to what happens here in our solar system, but in fact in other solar systems, exoplanet systems — but also, all of this energy and matter interacts with our technology," Young said. "It's interacting with spacecraft, sometimes disrupting them, and it even creates a really nasty environment for astronauts. Understanding that is important also for space travel near the Earth and through the rest of the solar system."