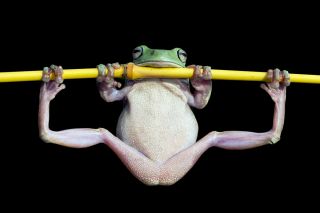 Dani Rabaiotti didn't expect to become something of an expert on animal farts. It all started on a family vacation when the zoologist's brother asked her if snakes farted. She realized she had no idea. But through a close community of animal researchers on Twitter, she knew someone who did.

When she asked David Steen, a wildlife ecologist and snake expert at Auburn University in Alabama, his tweeted response was a beleaguered "<sigh>, yes." It turns out, Steen gets this question quite a lot — and he's not the only one. Using the hashtag #doesitfart, scientists who study everything from parrots to elephants weighed in with their own answers on which of Earth's vast array of animals does and doesn't toot.

From that snowballing Twitter conversation, Rabaiotti and her co-author Nick Caruso, an ecologist at the University of Alabama, have produced a delightful and informative book called — what else? — "Does It Fart?" (Hachette Books, 2018). The book chronicles flatulence behaviors of species across the animal kingdom, from insects to top-level predators (including a couple extinct ones, such as dinosaurs). [The 10 Best Science Hashtags of 2017]

For Rabaiotti, writing the book (which will be released in the U.S. on April 3, 2018) is a prime example of "the weird places that studying zoology can take you," she told Live Science.

How frequently an animal breaks wind — and how pungent its emissions are — depends on several factors, including health, diet, gut microbes and the length of the animal's digestive tract. Cows, goats and other members of the family Bovidae have four stomachs packed with lots of methane-producing bacteria, for example, that release gas that exits the animals' bodies mostly through the mouth but also through the back end, Rabaiotti said. Foods high in fiber can make for more-frequent farts, while meat can produce hydrogen sulfide as it is digested, giving farts that paint-peeling rotten-egg smell, according to Rabaiotti.

Perhaps the most surprising fact Rabaiotti learned while researching the book, she said, was the way the larvae of one species of beaded lacewing — a type of winged insect — farts on the heads of termites to incapacitate and ultimately kill the prey for food. It's the "best example of seriously deadly farts," she said.

But the nastiest farts are the fishy stinkers of seals, she said. "This is from personal experience. Seal farts are the grossest. They're absolutely foul."

But the book isn't limited to giggle- and gag-inducing fart facts, though there are plenty of those. Rabaiotti and Caruso use the topic as a jumping-off point to explore the similarities and differences among animals, what their digestive habits can reveal about them, and how scientists can use farts to locate animals.

"Farts can be kind of useful," Rabaiotti said.

The book also touches on the vulnerability of certain species. The authors note, for example, that the formerly frequent sounds of loud farts from rhinos have dwindled as populations have been decimated by trophy hunting and habitat destruction.

Rabaiotti said she has had a love for animals since she was a child watching nature documentaries with her grandmother. She ultimately followed her dream of working toward a Ph.D. in zoology at the Zoological Society of London, where she is studying how climate change is affecting African wild dogs (yes, they're in the book, and yes, they definitely fart).

Each of the 80 animals in the book gets a page that answers the titular question with a "yes," "no," "maybe" or "unknown," along with a short blurb. The array of farting species, humorously drawn by artist Ethan Kocak, is heavy on mammals, particularly primates, but that's partly due to the available research, Rabaiotti said.

And when it comes to certain animals, such as spiders or bats, scientists don't actually know if the creatures pass gas.

"I think there's actually a surprising amount of animals that don't fart or we don't know if they do," Rabaiotti said. "I think a lot of species have understudied digestive systems."

Spiders, for example, do much of their digesting before they actually scarf down their prey, injecting them with venom that helps break down the meals. But the arachnids likely take in air when they do dine and have the bacteria in the sacs that help them digest, so it's possible they fart, Rabaiotti said. "The truth remains a mystery until urgently needed research funding is allocated," Rabaiotti and Caruso wrote (with an implied wink).

Birds are perhaps the most prominent and surprising animal that doesn't seem to fart. This could be because birds lack the gas-producing bacteria that other animals have and because quick avian digestion means there's not a lot of time to build up any wind, so to speak, the authors wrote.

It won't surprise any readers that the last entry in the book — humans — do fart, but Rabaiotti and Caruso included Homo sapiens because "there is so much to say about human flatulence," she said. "It was hard picking out which facts we thought were the most interesting."

An example: On average, humans break wind about 10 to 20 times per day.

As for what comes next, Rabaiotti joked that if the book sells as well as the "Harry Potter" series, the researchers could open a lab to start answering some of those open fart questions. If it even does pretty well, she and Caruso would be game for a sequel, she said. They already have a few answers for another pressing animal bodily function question: Does it puke?