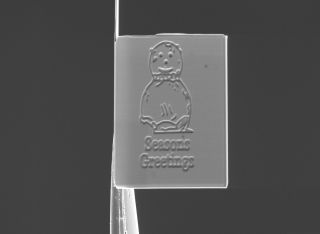 This is the world’s smallest Christmas card, created from platinum-coated silicon nitride by the National Physical Library in the U.K.
(Image: © NPL)

In a very, very, very small gesture of holiday goodwill, the U.K.'s National Physical Laboratory (NPL) has crafted the smallest Christmas card in the world, which is so tiny that it must be measured in microns — millionths of a meter.

On the tiny card's cover is a jolly-looking snowman and the message "Season's Greetings," but you wouldn't be able to read it without the help of a microscope. Inside the card is a second inscription of the holiday message, alongside "From NPL." This whimsical holiday creation showcases the work conducted at the lab with materials at the micron scale, to test their performance, determine new applications and improve miniaturization methods for tools and machines used in electronics, computers and medicine, according to the statement. [What Is the Smallest Thing in the Universe?]

Researchers crafted the card from a membrane of silicon nitride at a thickness of about 200 nanometers (0.0002 mm), coated with a 10-nanometer (0.00001 mm) layer of platinum. To carve the design and message on the card, the team used a focused ion beam, directing a fast-moving stream of charged particles toward the card's surface.

A previous record holder for the world's smallest seasonal greeting was presented by NPL in 2009, when the organization debuted a "nanosnowman" made from tin beads that are used to calibrate lenses in electron microscopes. It measured 10 microns (0.01 mm) wide. The tiny holiday sculpture was assembled using a system for manipulating particles on the nanometer scale, NPL explained in a statement. Then, a focused ion beam carved  the snowman's eyes and smile, and the structure was welded together with platinum, NPL reported.

Over the past decade, scientists and engineers have investigated numerous methods for designing complex contraptions or objects that seem impossibly small, producing an inchworm-like microbot that measures 250 microns (0.25 mm) long; the world's smallest hot-rod, or "nanodragster," that is 50,000 times smaller than a human hair; and light-activated molecular "scissors" that measure 3 nanometers in length.

And in 2016, three scientists shared the Nobel Prize in Chemistry for their work creating the world's smallest "machines," linking molecules together to form devices with moving parts that perform very tiny tasks.

The NPL's diminutive Christmas card is "a fun way to mark the festive season," but it also serves to spotlight the developing technologies that enable engineers to conduct delicate work with materials at such a small scale, David Cox, one of the creators of the card and an NPL research fellow, said in a statement.

"We are using the tools that created the card to accurately measure the thickness of extremely small features in materials, helping to unlock new battery and semiconductor technologies," Cox said.

"It's a genuinely exciting development that could help to make new technologies and techniques a reality," he said.