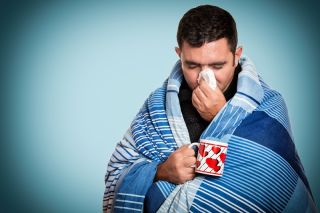 When a man complains of cold or flu symptoms, it may not be fair to dismiss his laments as simply a case of "man flu." Men may really experience worse symptoms than women after catching a respiratory virus, a new review suggests.

The review was published today (Dec. 11) in a special Christmas issue of the medical journal The BMJ; the holiday edition features research that is more lighthearted than the journal's usual fare.

"Man flu" refers to the idea that men may exaggerate the symptoms of a minor illness, such as a cold.  Although the term is commonly used (particularly in the United Kingdom), no scientific review so far has examined whether the term is appropriate or accurate, said Dr. Kyle Sue, a clinical assistant professor at Memorial University of Newfoundland in Canada, who authored the BMJ review.

In a search of the scientific literature, Sue found evidence that men may have a weaker immune response to the viruses that cause flu or the common cold, and as a result, men may have a greater risk for serious symptoms, and even death, from these viruses. [Men vs. Women: Our Key Physical Differences Explained]

For example, a 2008 study found that women had a stronger immune response to the flu vaccine, meaning they produced greater levels of antibodies against the virus strains in the vaccine, compared with men.

Other studies from Hong Kong and the United States have found that, compared with women, men have a higher risk for hospital admission and death from the flu.

"The concept of man flu, as commonly defined, is potentially unjust," Sue wrote in the paper. "Men may not be exaggerating symptoms but have weaker immune responses to viral respiratory viruses, leading to greater morbidity and mortality than seen in women," he said.

It's not clear why men may have a weaker immune response to respiratory viruses, but hormones could play a role, with the "female" hormone estrogen, in particular, providing a protective effect against these viruses, Sue said.

For example, in a 2016 study, researchers exposed male and female human nasal cells to estrogen in a lab dish, and then infected the cells with the flu virus. The investigators found that the estrogen reduced the levels of flu virus in the cells from female donors, but not male donors.

What's more, other studies have suggested that the "male" hormone testosterone may lower the body's immune response to flu viruses, Sue said.

Still, more research in this area is needed, in part because some of the studies include in the review did not consider factors like smoking and preventive-care visits, which could affect people's overall health and their ability to respond to cold and flu viruses, Sue said. The current review was not able to include research on respiratory viruses that did not separate out the results by sex.

Some researchers have speculated that men's apparently weaker immune response to certain viruses has an evolutionary explanation, Sue said. For our ancestors, the effects of testosterone (i.e., increased muscle and bone mass) may have outweighed the potential immunosuppressive effect of the hormone, he said. (More research, however, is needed to examine this hypothesis.)

Sue also noted that there could be benefits to the extreme energy conservation that men seem to require when afflicted with flu. "Lying on the couch, not getting out of bed or receiving assistance with activities of daily living could also be evolutionarily behaviors that protect against predators," Sue wrote in his tongue-in-cheek conclusion. "Perhaps now is the time for male-friendly spaces, equipped with enormous televisions and reclining chairs, to be set up where men can recover from the debilitating effects of man flu in safety and comfort."