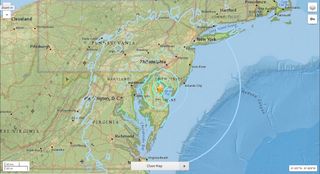 A magnitude-4.1 earthquake just hit near Dover, Delaware, surprising people in the First State, a place unaccustomed to tremblers.

The earthquake hit 5 miles (8.1 kilometers) underground at 4:47 p.m. EST today (Nov. 30), according to the U.S. Geological Survey (USGS). The epicenter, located within the Bombay Hook National Wildlife Refuge, was 6.4 miles (10.3 km) east of Delaware's capital, Dover, which has a population of about 36,000, USGS reported.

People reported feeling the earthquake in Delaware, New Jersey, Pennsylvania, Maryland, New York, Virginia and Washington, D.C., according to the USGS "Did You Feel It?" site, where people can report where they felt the ground shake. [The 10 Biggest Earthquakes in History]

There is no tsunami warning from the earthquake, according to the National Oceanic and Atmospheric Administration. Moreover, there are no reports of injuries or damages, Gary Laing, a spokesman with the Delaware Emergency Management Agency, told Delaware Online.

It's not yet clear what caused today's earthquake, but most earthquakes on the East Coast occur at faults within bedrock, the USGS reported.

The last big quake to hit the East Coast was the 5.8-magnitude earthquake near Mineral, Virginia, that surprised tens of millions of people on Aug. 23, 2011. That earthquake was felt from Maine to Georgia, and as far west as Chicago, according to the USGS.

The 2011 earthquake was caused by geologic structures within the Appalachian Mountains, whose curves reflect the twisted remains of ancient continental collisions, Live Science previously reported.