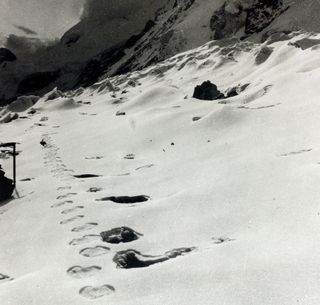 The abominable snowman, or yeti, reportedly created these footprints, captured in a photo taken during an expedition to Mount Everest more than 50 years ago.
(Image: © Popperfoto/Getty Images)

The yeti, also known as the "abominable snowman," looms large in the folklore of Nepal, Bhutan and Tibet. Reported sightings of the mythic creature have persisted for centuries in the high mountains of Asia, and people who live in the region have collected hairs, bones and other samples that they claim belong to the legendary beast.

However, scientists have now examined DNA from many of these items, finding that they came from bears and dogs.

These new findings also reveal that the high peaks of the Himalayas may have helped create an evolutionarily distinct bear lineage, researchers said. [Rumor or Reality: The 10 Creatures of Cryptozoology]

In 1951, British mountaineer Eric Shipton returned from a Mount Everest expedition with photographs of giant footprints in the snow. Ever since then, fringe theories have suggested that the elusive Asian yeti may represent a humanoid creature as yet unknown to science. Speculation regarding this animal has suggested that it may be a surviving member of an extinct human lineage, such as the Neanderthals or an extinct ape like Gigantopithecus, or even an unlikely hybrid between modern humans and other primates.

A 2014 study found that two purported yeti samples potentially came from a hybrid between a polar bear and a brown bear, said Charlotte Lindqvist, senior author on the new study and an evolutionary biologist at the University at Buffalo in New York. But Lindqvist was skeptical about the possibility of "some strange hybrid bear roaming the Himalaya Mountains," she told Live Science.

Lindqvist and her colleagues decided to follow up on the 2014 study by analyzing additional purported yeti samples. "My thinking was that if the yeti is really a bear, this study could be an interesting avenue to get access to hard-to-get-to samples of Himalayan bears," Lindqvist said.

All in all, Lindqvist and her colleagues analyzed nine "yeti" specimens, including bone, tooth, skin, hair and fecal samples collected from monasteries, caves and other sites in the Himalayas and the Tibetan Plateau. They also collected samples from bears in the region and from animals elsewhere in the world.

Of the nine yeti samples, eight were from Asian black bears, Himalayan brown bears or Tibetan brown bears. The ninth was from a dog.

"It was exciting to find that the purported yeti samples, without doubt, are not strange hybrid bear creatures, but simply related to local brown and black bears," Lindqvist said. "Modern science, and genetic data in particular, can help answer and resolve old mysteries."

These new findings also shed light on the evolutionary history of Asian bears. While Tibetan brown bears share a close common ancestry with their kin in North America, Europe and Asia, the researchers found that Himalayan brown bears belong to a distinct evolutionary lineage that diverged from all other brown bears about 650,000 years ago.

"This is long before modern humans migrated out of Africa," Lindqvist said. "It is probably the high peaks of the Himalayas that have kept these populations separated and isolated from other brown bear populations."

The scientists detailed their findings online Nov. 29 in the journal Proceedings of the Royal Society B.