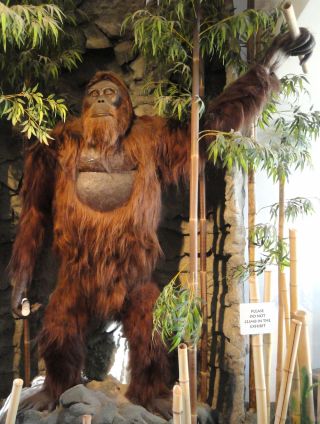 A depiction of Gigantopithecus blacki, the largest ape to ever walk the Earth.
(Image: © Wikimedia Commons)

The biggest primate that ever walked the Earth may have died out because of its giant size and limited diet, new research suggests.

Little is known about the mysterious Gigantopithecus blacki, a distant relative to orangutans that stood up to 10 feet (3 meters) tall and weighed up to 595 lbs. (270 kilograms).

However, a new analysis of its diet suggests it lived and ate exclusively in the forest. When its forest habitats shrank about 100,000 years ago, the enormous ape may not have been able to snag enough food to survive and reproduce, and went extinct as a result, said study co-author Hervé Bocherens, a paleontologist at the University of Tübingen in Germany.  [6 Extinct Animals That Could Be Brought Back to Life]

Scientists know almost nothing about the mysterious ape. The first hint of its existence came in 1935, when German paleontologist Gustav von Koenigswald happened upon Gigantopithecus molars in a pharmacy in China; the molars were labeled as "dragon teeth," which practitioners of traditional Chinese medicine believe can heal a variety of maladies.

For years, that was the only trace of the greatest ape that ever lived. Since then, however, researchers have found dozens of teeth and a few partial jaws of Gigantopithecus in several spots in southern China, Vietnam and even India.

"There is no skull, no postcranial skeleton. Everything is very mysterious," Bocherens told Live Science.

Based on fossils, researchers believe G. blacki roamed throughout Southeast Asia for at least 1 million years, going extinct around 100,000 years ago. Its morphology suggests its closest living relatives are orangutans, meaning that African primates such as chimps are more closely related to humans than to G. blacki, he said. [In Photos: A Game-Changing Primate Discovery]

Scientists still knew relatively little about how the gigantic beast lived and why it died out, though theories abound. Noting the similarity between the large size of G. blacki's molars and the overgrown chompers of giant pandas, some have argued G. blacki dined exclusively on bamboo. But wear and tear on the teeth of G. blacki suggested it ate a diet heavy on fruits, with leaves and roots in the mix, Bocherens said.

To get a better picture, Bocherens and his colleagues conducted a chemical analysis of a Gigantopithecus blacki tooth first uncovered in a cave in Thailand near a dam teeming with other fossils, including remnants of orangutans, deer, buffalo and porcupine. (The dam has since been completed and the site has washed away, Bocherens said.)

Because grasses and leafy plants use slightly different chemical pathways for photosynthesis, grasses accumulate higher levels of carbon-13 (meaning carbon with seven neutrons) than carbon-12 (which has six neutrons). As animals up the food chain eat these plants, they retain the chemical signature of their diet in the ratio of these carbon isotopes present in their bones and teeth. As a result, the scientists were able to identify the diet and habitat of G. blacki based on the ratio of carbon isotopes in its tooth enamel. The team also analyzed the dietary signature of the other large mammals found at the Thailand site, as well as the diets of existing large mammals.

It turned out that G. blacki ate, and presumably lived, exclusively in forested regions. But the carbon ratios in the other animals from the cave revealed they were eating a mix of foods from both the savanna and the forest. That suggests that at the time the gigantic ape lived, Southeast Asia was a mosaic of forest and savanna. So Gigantopithecus blacki lived near huge swaths of grassland, yet didn't forage in the nearby grasslands.

The combination of this restricted diet and its huge size may have doomed the giant creatures, Bocherens said.

"Living in the forest was really the only option for Gigantopithecus. So if the forest disappears, there is no possibility to find another habitat," Bocherens said.

It's likely that each time the climate got cooler and drier at various points in the Pleistocene epoch, the forested region shrank and the population of G. blacki crashed. Sometime around 100,000 years ago, a cold snap occurred and there were simply too few of the giant beasts left to survive, the researchers speculate.

As supporting evidence for this hypothesis, Bocherens notes that similar "population bottlenecks" reduced the range of orangutans from almost all of Southeast Asia to their current tiny habitats in the rainforests of Sumatra and Borneo. However, orangutans have smaller bodies and can reduce their metabolism to very low levels during seasons when fruit is unavailable, which likely helped keep their population stable during periods when forest habitat was sparse. Gigantopithecus may not have had that option.

Still, the story doesn't completely explain why G. blacki disappeared when it did, Bocherens said.

"There were a lot of fluctuations of climate, and there were also colder and drier conditions." Bocherens said. "I see this as a beginning study. It's putting a new piece in the puzzle, and the puzzle is not very complete."