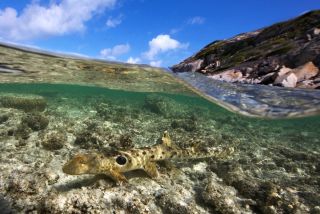 The epaulette shark can do what no other shark can: It can walk on its fins.
(Image: © copyright Minden Pictures/Alamy Stock Photo)

Great Whites may get all the headlines, but it's a miniature species of shark that can do what no other shark can: walk.

The epaulette shark (Hemiscyllium ocellatum) grows to less than 3.3 feet (1 meter) in length and lives in shallow coral reefs off Australia, Indonesia and New Guinea. With its small body and brown-spotted skin, the shark doesn't seem very flashy. But the species is well-adapted to its shallow marine environment. If a receding tide strands the animal on the reef, not only can the shark slow its metabolism to survive for an hour on a single gasp of air, but it can also use its fins to "walk" back into the water.

A new documentary by PBS called "Nature's Miniature Miracles" shows the sharks doing just that. The 1-hour show, part of the channel's "Nature" series, will feature feats by planet Earth's small, often-overlooked creatures. Viewers can watch epaulette sharks escape suffocation on dry land, see a peacock spider (Maratus Volans) do a colorful mating dance and peek in on a Japanese puffer fish as it sculpts a mating nest out of sand with its fins. [Photos: Pufferfish Make Seafloor Circles to Mate]

Epaulette sharks didn't just stumble across their walking ability. According to the Oceanic Society blog, both sets of the sharks' fins evolved to have more range of motion than other sharks' fins, enabling the animals to army-crawl through half-exposed coral reefs.

The sharks' low-oxygen adaptations also give them an edge over other predators, because they can hunt for prey in shallow-water environments where other sharks and predatory fish would die, according to the blog post. Nine species of epaulette shark have been discovered, and all can walk, but H. ocellatum is best-known for walking on land, according to the post.

The "Nature" documentarians trotted the globe in search of other tiny-yet-amazing subjects. In southern Africa, the documentarians profile the sengi, or elephant shrew (Elephantulus rufescens), which weighs less than a pound (0.5 kilograms) but can run at speeds of at least 18 mph (28.8 km/h), according to the BBC. In the PBS documentary, one sengi races for its life from a monitor lizard.

In the Sahara desert, the team finds the palm-sized resurrection plant, in the genus Selaginella. This organism appears to dry up and die during periods of drought, but it can rebound back to life within hours once given water — even after a century of senescence.

Other small wonders profiled include hermit crabs, tiny hummingbirds that migrate thousands of miles each year and the microscopic phytoplankton that form the base of the oceanic food chain. For sheer cuteness, the show-stealer might be the "foot-flagging frog," a group of tiny amphibians from India that stick out their webbed feet to attract mates.