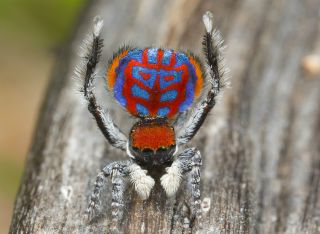 They're fuzzy. They're colorful. And they wave their legs in the air like they just don't care.

They're peacock spiders, a group of tiny arachnids that are small in stature but giants in the charisma department, best known for their brilliant colors and energetic courtship "dances" — much like the showy, fan-tailed peacocks that inspired the spiders' name.

Researchers found the newly described species — all of which were in the genus Maratus — in Western Australia and South Australia, bringing the total number of known Maratus species to 48. The spiders in this genus measure on average about 0.16 to 0.20 inches (4 to 5 millimeters) in length, with females a bit larger than the males.

Females that belong to this genus tend to be dappled in different shades of brown. But it's the males' dramatic coloration that catches the eye and prompts biologists to assign them whimsical nicknames like "Sparklemuffin," which was bestowed upon a peacock spider species described in 2015. Colors and patterns are displayed on the males' abdomens, frequently on a "fan" — a flat structure that is lifted up toward the female during the male's courtship performance. [6 Colorful Peacock Spiders Caught On Video]

In one of the newfound species, Maratus bubo, males bear a particularly striking pattern, in dazzling shades of red and blue. According to study author Jürgen Otto, the pattern reminded him and co-author David Hill of an owl's face, inspiring them to name the species "bubo," after the genus for horned owls.

Another new species, Maratus tessellatus, isn't as colorful as its cousins, but performs incredibly fast "footwork" during its courtship dance. Otto noted in a photo description of M. tessellatus that the spider does not elevate its abdomen as many of its kin do, which could explain its reliance on speedy leg moves to make an impression on interested females.

Otto, a mite biologist and spider enthusiast, told Live Science that his fascination with spiders began in childhood. But it wasn't until he moved to Sydney and happened upon his first peacock spider "just hopping in my path" in 2005 that he developed an all-consuming interest in the group. He currently keeps hundreds of them in various life stages in his home for scientific observation and photography. Otto admitted that he used to maintain a pile of leaves on the dining room table to use as a photographic setting for the spiders, but eventually had to move it after his wife complained.

"I do nothing else," he said. "All my spare time is devoted to the spiders."

And much of that time is spent photographing them — typically from a distance of less than an inch — with a special macro lens that magnifies his tiny subjects up to five times. The spiders, Otto said, seem oblivious to the camera. They tend to ignore him — or jump on his lens.

"I often lose them," he said. "Sometimes I spend as much time looking for the spiders as I do photographing them."

Otto estimated that over the years he has shot hundreds of thousands of photos of peacock spiders, a small fraction of which he posts to Flickr albums. That might sound excessive, but Otto explained that when you're dealing with animals that have never been seen before, it's imperative to record "all the aspects" of both males and females — their body parts and postures from every angle and in multiple positions. For Otto, that means capturing as many images of the living animals as possible.

"When they're preserved in alcohol, they change color," Otto told Live Science. "Having the photos shows how they look when they're alive."

Ironically, Otto has never seen some of the peacock spiders' true colors — he is partially colorblind. But while he may not be able to perceive the full range of hues that decorate the spiders' bodies, he hopes that his images and video can help convey their unique charm to others — especially those who may not find spiders charming at all.

"I've heard people say, 'I hate spiders, but I love these!'" Otto said. "If people turned from arachnophobes into arachnophiles, that would be my greatest achievement."

The findings were published online May 22 in the journal Peckhamia.