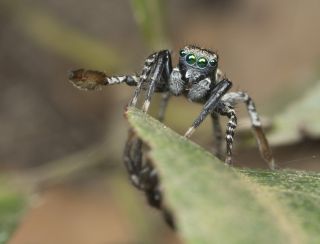 A newly discovered species of spider, Jotus remus, is so named because it sports an enormous paddelike appendage on its third pair of legs. (In Latin, remus means oar or paddle.) The spider likely flashes his paddle in order to woo mates.
(Image: © Jurgen Otto)

Males of the human variety may spend hours at the gym bulking up to attract the ladies, but that's nothing compared to the efforts of a new spider species from Australia.

This little brown spider sports a massive, paddlelike appendage on its legs that it flashes at females to woo mates, new research has revealed.

The new spider species, Jotus remus, can do this paddle "peekaboo" routine for hours, all to get female spiders to accept its advances. The paddle seems to be a way of separating the fertile females from those that have no interest in mating, said Jürgen Otto, the biologist who discovered the oddball spider. [Incredible Photos of Peacock Spiders]

Otto has a day job researching mites at the Australian Department of Agriculture and Water Resources in Sydney, but spends his free time hunting down gorgeous and unusual peacock spiders. (Otto maintains a YouTube channel filled with videos of the bizarre mating dances of peacock spiders.) He first discovered J. remus, while on a camping trip with his family during Christmas break in 2014. While unpacking the car after the trip, he spied an ordinary-looking brown spider sitting on his tent bag.

"At first it didn't seem really unusual. It had color, patterns and shapes I've seen before," Otto told Live Science. "But I looked closer and noticed it had these funny extensions on their third pair of legs, it seemed like a paddle."

Otto suspected the creepy crawly was a new spider species, but had no idea what the paddle was for. And finding out posed a bigger problem: He wasn't sure whether the spider lurked in the wilderness around his home or was a stowaway from his campsite at Barrington Tops National Park, about 125 miles (200 kilometers) north of Sydney.

Eventually, Otto returned to his camping location and noticed several of the spiders on a walking trail he'd visited during the trip. He suspected the darker brown arachnids were the females, so he scooped some of those up, as well as additional males and put individual males and females together with some twigs and leaves to see what they did.

The male spider quickly hid behind a leaf as the female spider watched.

"From under the leaf he stretched out one of his legs, of the third pair," Otto told Live Science. "He exposed that paddlelike extension to her and waved it at her." The female occasionally lunged toward the male spider. The male handily evaded her.

"He seemed to have no difficulty at all escaping from these attacks; he seemed to be playing a game," Otto said.

This seemingly pointless game of hide-and-seek went on for many minutes until the male gave up. Otto tried the same thing with multiple females and male piders. Perhaps the male was trying to exhaust the females, to make them more receptive to his mating advances, Otto said he thought. But the females didn't seem to get tired, no matter how long the male persisted. Like the male spider, Otto eventually set aside the peekaboo game and pursued other spider questions.

But a few months ago, some of the immature females of J. remus grew up. These spider females were "virgins" who had had no opportunity to mate with males. In these types of spiders, females can probably only mate once, so non-virgin females are of no use for males looking to pass on their genes, Otto said.

When Otto put the male spider together with the virgin female spider, the male went ahead with his paddle routine. But the female, rather than lunging at him, watched curiously. Within a few minutes, the female became very calm and still. At that point, the male spider made his move, emphatically thrusting his paddle twice.

"After those two vigorous paddle strokes, he just jumped up very quickly to the other side of the leaf and went on mating with that female," Otto said.

So the paddle dance seemed to be an elaborate way for male spiders to figure out if a prospective female is "the one," Otto said.

"The one that keeps attacking him is not the right one," Otto said. (Probably good advice for males of any species.)

While Otto has never seen a female spider eat a male, the females are superb hunters and the males of the species are significantly smaller than the females, "just the right size for him to be food," Otto said. As such, the elaborate paddle game may partly be a protective mechanism, a way for males to avoid risking danger with a female who has no interest. Still, the males are swift and never seemed to be truly threatened by the females, and the whole encounter seems almost playful, so there could be another explanation for the male spiders' sneaky moves, he added.

One question still puzzles Otto: Why do the males play so long with partners who clearly have no interest?

"If the male gets a reaction from the female telling him she is not really happy to mate with him, why does he keep on trying?" Otto said. "There's a lot of play going on that seems to be wasted energy."

Otto and his colleague David Hill, a zoologist in Greenville, South Carolina, described J. remus in a paper that was published online Jan. 7 in the journal Peckhamia.