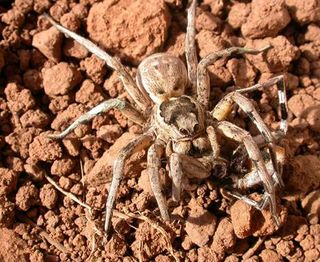 Certain female spiders are infamous for eating their partners after sex, but some actually pounce on suitors, fangs first, before mating even occurs.

Now, new research shows that a female spider's "personality" could influence whether she chooses to immediately cannibalize or instead copulate with potential partners.

Scientists have proposed a host of evolutionary reasons for why so many spiders practice sexual cannibalism. For females, eating a mate could provide a nutritional advantage, or rid the population of undesirable fathers. As for the males, their sacrifice could ensure that their genes get passed on: In some species, the males leave their detachable palp (a spider equivalent of a penis) inside the female's body after mating to keep sperm from other males out, like an arachnid chastity belt. [Creepy, Crawly & Incredible: Photos of Spiders]

But the benefits of sexual cannibalism are less obvious when virgin females devour potential suitors of all sizes indiscriminately, without ever giving them a shot at sex.

"While docile females attack inferior males and prefer to mate with superior males, aggressive females kill males regardless of their condition, which demonstrates their inability to distinguish males as sources of sperm or food, indiscriminately cannibalizing them," study author Rubén Rabaneda-Bueno told the Spanish news agency SINC this week.

For their study, Rabaneda-Bueno and colleagues rounded up 99 males and 80 females of the Iberian tarantula Lycosa hispanica. The researchers assessed the female spiders, labeling them as either aggressive or docile after watching how they reacted to a buffet of beetles and other prey. The female spiders were branded as more aggressive if they had voracious appetites, and fattened up more than their restrained peers.

Then the female spiders — all virgins — then were thrown together with males. The gentler females were more likely to copulate first before attacking their mates, whereas the more aggressive females went after the males before even having sex, the researchers found.

"We reached the conclusion that there are aggressive genetics which vary among females and make them act aggressively, both when they feed off prey, and when they approach a male in courting," study director Jordi Moya Laraño told SINC. "Others are docile in both contexts, highlighting the existence of different personalities."

The research first appeared online Dec. 26 in the journal Ethology.