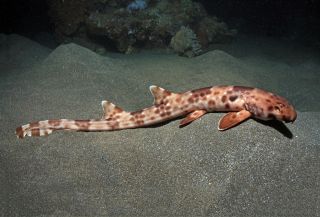 A new species of "walking" shark has been discovered in a reef off a remote Indonesian island.

These sharks don't always rely on "walking" to move about — often, they only appear to touch the seafloor as they swim using their pectoral and pelvic fins in a walklike gait, said Fahmi (who only goes by one name), a shark researcher at the Indonesian Institute of Science who wasn't involved in the study describing the species. In the video of the newfound walking shark, however, the animal is clearly touching the seafloor. [Video: New Shark "Walks" Along Reef]

The shark grows up to 27 inches (70 centimeters) long and is harmless to humans, said Mark Erdmann, a marine biologist and adviser with Conservation International who was also a co-author on the study describing the species. The animal has been dubbed Hemiscyllium halmahera, named after the eastern Indonesian island of Halmahera where it was found. Sharks in its genus (the taxonomic group above species) are also known as epaulette sharks, since many sport markings that resemble military epaulettes, according to a Conservation International statement.

Of all known epaulette or walking sharks, six of nine species hail from Indonesia, Fahmi told LiveScience. The animals lay eggs under coral ledges, after which the young sharks lead relatively sedentary lives until adulthood, according to the statement. These sharks do not cross areas of deep water and are found in isolated reefs throughout Indonesian and western Pacific waters, the statement noted.

[On the Brink: A Gallery of Wild Sharks]

Coincident with the discovery of the new species, Indonesia has announced various initiatives to protect sharks. In the last six months, for example, two of the country's biggest tourist destinations, the island groups of Raja Ampat and West Manggarai, have outlawed shark and ray fishing in their waters, according to the statement. The Ministry of Marine Affairs and Fisheries is also drafting legislation to protect endangered sharks and rays, said Agus Dermawan, director of the Ministry's Marine Conservation Directorate, in the release.

Part of the reason for the shift toward conservation is that sharks are important for tourism; sharks are generally worth more alive in the ocean than they are worth dead, Dermawan said. "We now know, for instance, that a living manta ray is worth up to US $1.9 million to our economy over the course of its lifetime, compared to a value of only $40 to $200 for its meat and gill-rakers," which are used in traditional medicines, Dermawan said.

A study describing the new walking shark species was published in July in the Journal of Ichthyology.