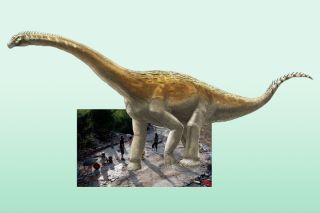 An illustration of the Plagne sauropod superimposed on its tracks.
(Image: © Drawing: A. Bénéteau; photo: Dinojura)

Imagine a dinosaur footprint as long as a young child is tall. Now, imagine 110 of them. Amazingly, that's what paleontologists have discovered in eastern France — 110 fossilized footprints belonging to a long-necked sauropod that lived during the Jurassic period.

Part of the trackway was uncovered in the French village of Plagne, located in the Jura Mountains, in 2009. In the years that followed, paleontologists uncovered more of the 150-million-year-old site, a meadowland covering 7.4 acres (3 hectares), an area roughly the size of six football fields. [Photos: Dinosaur Tracks Reveal Australia's 'Jurassic Park']

The sauropod's circular feet were big: 37 inches by 40 inches (94 by 103 centimeters), but the total footprint length could reach up to 10 feet (3 m) when considering the mud ring that was displaced by each step, the researchers said.

Based on its foot and handprint sizes, the herbivorous sauropod was likely 115 feet (35 m) long and weighed up to 40 tons, the researchers said. This would explain its average stride length of about 9 feet (2.8 m), they noted.

The fossilized prints yielded other clues, too. A close examination of the footprint revealed five oval-shaped toe marks, and the handprints had five spherical finger marks arranged in an arc, the researchers said. The dinosaur likely walked at a speed of 2.5 mph (4 km/h), they added.

Based on the prints' characteristics, the researchers gave the Plagne sauropod tracks a new scientific name: Brontopodus plagnensis. This is not the name of the dinosaur species (which remains unknown), but rather the name of the trace fossil — a fossil made by an animal, but not containing the animal itself, such as fossilized prints, burrows or feces.

In addition to the sauropod tracks, the researchers also uncovered 18 fossilized prints that spanned 125 feet (38 m). These tracks appear to belong to a carnivorous dinosaur, which has left trace fossils, known as Megalosauripus, elsewhere.

The paleontologists have covered all these dinosaur tracks to protect them, and speculate that there are more left to be uncovered.

The study was published in the August 2017 issue of the journal Geobios.