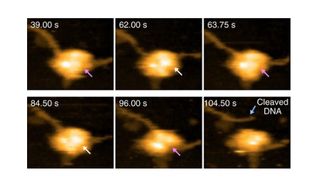 Stills from the video that shows CRISPR in action.
(Image: © Crispr-Cas9 by Mikihiro Shibata and Hiroshi Nishimasu under CC BY 4.0)

CRISPR is the set of molecular scissors that's changing the world. It's an enzyme that cuts DNA, and scientists figured out in 2012 that they could deploy it for cheap, effective gene editing: Just tag the CRISPR molecule with a bit of RNA (a slim sliver of genetic material that sticks to DNA) to guide it, and it can cut out and "rewrite" any snippet of DNA its wielders would like to target.

Researchers have been playing with CRISPR for years, tackling HIV, deleting genetic diseases from the cells of experimental human embryos and raising the possibility of cross-species organ transplants. Some scientists are even seriously talking about resurrecting the long-extinct woolly mammoth with CRISPR's help.

But until now, scientists haven't directly observed CRISPR in action. They know it works, because if CRISPR is used on some cells, those cells churn out DNA with the edits applied. But because the molecules involved exist on such a tiny scale, it's incredibly difficult to directly observe them in action. [10 Amazing Things Scientists Just Did with CRISPR]

But "difficult" does not mean impossible. In a paper published Nov. 10 in the journal Nature Communications, a team of researchers led by Mikihiro Shibata of Kanazawa University and Hiroshi Nishimasu of the University of Tokyo revealed a visual observation of CRISPR in action.

That same day, Nishimasu shared a GIF on Twitter that shows the action unfold in near real time.

It's a little difficult to parse what's going on here, but the arrows that the researchers added help. Those long coffee-brown lines? Those are DNA strands. The sun-yellow blob? That's the CRISPR-Cas9 enzyme, called CRISPR for short, and its blob of guiding RNA. The purple arrows point to the spot on the strand that CRISPR bites into, and the second piece of DNA, indicated by the gray arrow, separates after CRISPR finishes chomping down. The whole process, which is sped up in the GIF, takes about 30 seconds.

The researchers captured the video using a technique known as atomic force microscopy. In a blog post for the Georgia Institute of Technology's Nano Research Group, researcher Wenjie Mai, who was not involved in the new paper, explained that atomic force microscopy involves tapping a subject over and over, point by point, very fast, with an incredibly sharp needle and recording the force the needle encounters. It allows researchers to build rough — but extremely sharp, in nanoscale terms — images and videos of the impacted area.

This video reveals for the first time a direct observation of CRISPR behaving just as researchers had long suspected it to. The Atlantic reported yesterday (Nov. 13) that when the researchers showed off their video at a conference in Big Sky, Montana, the audience full of seasoned CRISPR users gasped.