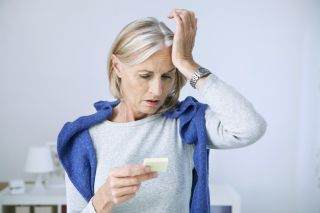 Decreased blood flow from the hearts of older adults may lead to decreased blood flow in areas of the brain responsible for memory — a finding that may reveal a possible link between heart problems and Alzheimer's disease, a new study finds.

The researchers found that people in the study whose hearts pump less blood than they should tend to experience significant problems with blood flow to the left and right temporal lobes of their brains ¾ areas that are involved in memory, and that tend to shrink in cases of Alzheimer's disease.

"We've known for some time that individuals with Alzheimer's have changes in blood flow in the brain," said co-study author Angela Jefferson, the director of the Vanderbilt Memory & Alzheimer's Center at Vanderbilt University Medical Center. [Extending Life: 7 Ways to Live Past 100]

But this is the first time a direct link has been drawn between those blood-flow issues and heart health, Jefferson told Live Science.

The findings, which were published today (Nov. 8) in the journal Neurology, come from an ongoing, far-reaching project at Vanderbilt to collect data on the relationship between lifestyle and physical health issues, and problems in aging brains. In the current study, more than 300 people with an average age of 73 who had no severe heart or brain diseases sat through echocardiograms to measure the strength of their hearts. They also underwent MRIs to measure blood flow in their brains.

The researchers found that for every one-unit decrease in cardiac index — a measure doctors use to pinpoint heart strength ¾ the left temporal lobe experienced, on average, the same decrease in blood flow that's typically associated with 15 years of aging, and the right temporal lobe went through a blood-flow decrease typically associated with 20 years of aging.

The patients' "cerebrovascular reactivity," or the brains' ability to increase blood flow when it needs to, also significantly suffered, the researchers found.

Jefferson cautioned, however, that it's important not to overread the results of the study. For example, the data is "cross-sectional," which means that each patient's measurements were taken from just a single moment in time. Without looking at how those numbers change in relationship to one another over time, it's impossible to be sure that heart problems cause these brain problems, Jefferson said.

It's entirely possible that the reverse may be true: that the blood-flow problems researchers observed in the brain lead to heart problems, or that both result from some unknown third factor, she said. And even if heart problems play a role in cognitive decline, they are likely not the only culprit.

Still, the results here are an "exciting first step" for researchers interested in all of those questions, Jefferson said.