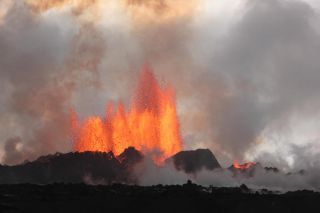 Earthquakes are shaking the ground around Iceland's explosive Bardarbunga volcano, but experts say there's a perfectly reasonable explanation for this: The volcano is likely refilling its tank with magma and preparing, albeit slowly, for its next eruption.

"Bardarbunga is a healthy volcano," said Sara Barsotti, coordinator for volcanic hazards at the Icelandic Meteorological Office. "It is doing what it should be doing."

Bardarbunga is one of Iceland's most active volcano systems. It last erupted from September 2014 to February 2015, spewing lava and releasing gases such as sulfur dioxide. [Gallery: Iceland's Booming Bardarbunga Volcano]

After the volcano's six-month-long eruption ended, the area experienced almost no earthquakes, Barsotti said. But earthquakes began shaking the region again in December 2015, although most were quite small, with a magnitude of about 3.0 or less, she said.

Since then, additional small earthquakes have rattled the region, sometimes several times a day, Barsotti said. However, four earthquakes of higher magnitudes — 3.9; 3.2; 4.7 and 4.7 — raised eyebrows when they shook the volcano in late October.

These larger rumblings likely mean that the volcano is replenishing its magma supply, which burst out during Bardarbunga's last eruption.

"This is part of its life," Barsotti told Live Science. "After an eruption, it starts to receive fresh magma," largely because of increased pressure deep in its system, she said.

It's possible that the earthquakes are getting stronger because the volcano's heavy, bowl-like caldera floor collapsed somewhat during the last eruption, Barsotti said. Now, the magma may be pushing the caldera back up, leading, in part, to these larger earthquakes, she said.

But it's difficult to say for sure. "It's hard to know what a deep volcanic system is doing, as all of our measurements are just done on top, at the surface," Barsotti said.

The Vatnajokull glacier covers part of this system. If the magma stored under the glacier were to erupt, it could rapidly melt the ice there and cause a catastrophic flood that would barrel toward people living in the lowlands below the volcano, Barsotti said.

The Icelandic Meteorological Office monitors the system for seismic activity 24 hours a day, but it's anyone's guess when Bardarbunga will erupt next, Barsotti said.

"It might be that this trend of large earthquakes might continue for years," Barsotti said. Or, "the equilibrium of the volcano will be broken soon, and we will see another eruption. It is hard to say. Our duty is to keep a constant eye and to detect any minor change that might be indicating something."