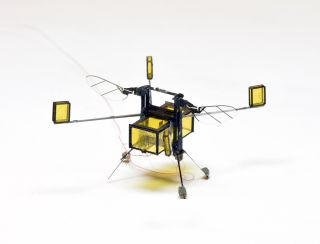 This tiny robot, called RoboBee, can fly, dive into water, swim, propel itself back out of water and safely land.
(Image: © Courtesy of Yufeng Chen/Harvard SEAS)

A new robotic "bee" can fly, dive, swim and leap out of the water, and it's totally adorable to boot.

"RoboBee" is an aerial-to-aquatic robot that weighs just six-thousandths of an ounce (175 milligrams). These bots were first reported in 2014 in the journal Bioinspiration and Biomimetics, when — after 12 years of trying — Harvard roboticists finally got the tiny, fly-inspired devices to flutter. Since then, they've been adding functions. Now, they've made a robot that can swim and fly.

"This is the first microrobot capable of repeatedly moving in and through complex environments," Yufeng Chen, who co-authored a paper describing the new technology while a graduate student at Harvard University. "We designed new mechanisms that allow the vehicle to directly transition from water to air, something that is beyond what nature can achieve in the insect world." [7 Cool Animal-Inspired Technologies]

The challenge of making this transition had to do with the viscosity of water versus air. RoboBee needed to be able to alter its wing-flapping rate so that it could flutter much faster in air than in water. (If the wings tried to flutter as fast in water as they needed for flight, they'd break off due to the greater viscosity of water.) The wing size also had to be appropriate for both mediums.

The researchers ended up developing a bot that can switch from flapping at a frequency of about 300 hertz in the air to only around 13 hertz in the water.

The bee robot also needed to be able to get out of the water again. This proved tricky, because the surface tension of the water — the forces that hold water molecules to each other — easily overwhelmed the tiny robot, which is about the size of a paperclip. To power it through, the researchers added four outrigger floats, which kept the robot buoyant at the surface. They also equipped it with a central electrolyte plate that can convert water into oxyhydrogen. This oxyhydrogen acts as a fuel that blasts the bot out of the water onto the nearest solid surface.

"By modifying the vehicle design, we are now able to lift more than three times the payload of the previous RoboBee," Chen said.

The RoboBee can't fly immediately after leaving the water because it lacks onboard sensors that tell it what medium it's in and doesn't yet have sufficient motion-tracking for the fast feedback needed for self-control. The team plans to add these features in future iterations.

"We hope that our work investigating tradeoffs like weight and surface tension can inspire future multi-functional microrobots — ones that can move on complex terrains and perform a variety of tasks," Chen said.

The robots can also elucidate the physics of the very small, said Robert Wood, the senior author of the new paper and an engineer at Harvard University.

"While flying, the robot feels as if it is treading water; while swimming, it feels like it is surrounded by molasses," Wood said in a statement. "The force from surface tension feels like an impenetrable wall. These small robots give us the opportunity to explore these non-intuitive phenomena in a very rich way."

The new research appeared in the journal Science Robotics on Oct. 25.