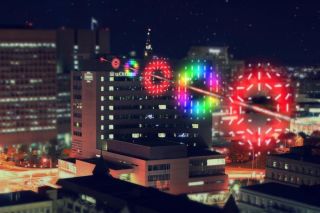 A quantum-encrypted message containing more than one bit of information in each particle of light was beamed through the air between two buildings in a real-life city for the first time, a demonstration that could simplify quantum communication and make it more viable in the future, according to a recent study.

Scientists previously demonstrated in laboratory conditions that a single particle of light, or photon, could encode multiple bits of information. But until now, the experiment had never been demonstrated in a real-world scenario.

"So far, people have done quantum communication in such a way that they can send either zero or one: one bit of information," said study lead author Ebrahim Karimi, an assistant professor in the Department of Physics at the University of Ottawa. [The 9 Most Massive Numbers In Existence]

"The problem is that for every single letter, you need to send eight signals — eight zeros or ones. And that's really difficult," Karimi told Live Science. "One signal can get lost and then the entire letter, the entire message, is lost."

Encrypting information into the quantum states of particles such as photons in multiple dimensions would therefore considerably simplify the whole process, according to Karimi.

"Instead of sending many photons, or many electronic signals, I can send you a single pulse, which contains a file of information," he said. "That would be amazing. This is what we call superdense coding."

The method tested by Karimi and his team can reduce the number of photons required to transmit a message by 50 percent, according to the study.

During the experiment, Karimi and his team successfully sent photons containing two bits of information between two buildings at the University of Ottawa that were located 984 feet (300 meters) apart.

According to Karimi, using high-dimensional encoding would also bolster security, making the quantum-communication channel more resistant to "noise" from weather or other external influences.

"In one-dimensional quantum communication, if the noise reaches to 11 percent [of the signal], the channel is no longer secure," Karimi said. "However, the limit will increase to 19 percent, if you work with four dimensions."

The researchers would now like to experiment with sending and receiving high-dimensional quantum-encrypted messages at distances of up to 3.5 miles (5.6 kilometers), in order to be able to use the technique on the city scale. However, there are significant challenges that will need to be overcome.

"The biggest difficulty is turbulence as the light transmits through the atmosphere," Karimi said. "In our experiment, we are sending a single photon, so that is really difficult. You need to send it to go under a certain angle and use a complicated telescope with sophisticated electronics." [Wacky Physics: The Coolest Little Particles in Nature]

The researchers used equipment developed by their colleagues from the University of Naples Federico II, in Italy, that was previously tested in the lab. The device relies on liquid-crystal technology to polarize a passing beam of light to encode the information. For the purposes of the experiment, the researchers had to build rooftop sheds to protect the equipment from weather.

The technology could one day be used as part of a global quantum-communication system that would include ground-based networks as well as satellites, the researchers said.

Scientists around the world are focusing efforts on quantum cryptography as a way to increase security in the digital world. All messages, transactions and data exchanges between Internet users are encoded via complex mathematical algorithms. However, with recent developments in quantum computing, experts fear such mathematical algorithms will no longer be secure in the future. Quantum computers, once they become a reality, are expected to be capable of performing multiple calculations at the same time. As such, quantum encryption could be the answer to security concerns, experts say, because it is inherently unbreakable.

"There is no cloning method that means you cannot copy information perfectly," Karimi said. "The second point is that in the quantum world, everything is undefined, everything is blurred. You don't know what is the value unless you measure it."

Measuring the particle, however, affects the particle and thus the message it contains, Karimi said. This means a third person eavesdropping on communication between A and B would be caught immediately.

Earlier this year, in July, Chinese scientists reported a major milestone in the development of quantum encryption when they successfully transmitted entangled photons from a satellite to a ground station.

The study's findings were published online Aug. 24 in the journal Optica.