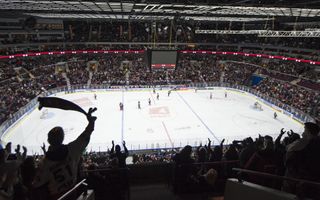 There's nothing quite like the rush of seeing your favorite sports team pull off a win at the last second. But watching live sports can put some serious stress on your heart, a new, small study finds.

The excitement of sports is likely responsible for the observed increases in heart rate, said study author Dr. Paul Khairy, a cardiologist at the Montreal Heart Institute. [Heart of the Matter: 7 Things to Know About Your Ticker]

But the new study is the first to demonstrate that the ambience of a live game — being surrounded by cheering fans, being closer to the action and experiencing an increased level of engagement — may all contribute to the heightened emotional stress response in fans, Khairy told Live Science.

In the study, the heart rates of fans who watched a hockey game in person increased by 110 percent, on average, from their resting heart rates. That's comparable to the increase you'd see in someone running, jumping rope or doing any other vigorous form of exercise, Khairy said.

Fans who watched the same game on TV had a 75 percent increase in their heart rates, on average, which is similar to the heart rates seen with moderate physical activity, such as a casual bike ride, Khairy noted.

This is the first time that the heart-rate response of hockey spectators has been measured, the researchers wrote. But previous studies from Europe have found higher heart rates in soccer fans who watched World Cup matches in person. These increases occurred after their team scored a goal or after their team beat an opponent.

In the new study, the researchers looked only at fans of the Montreal Canadiens, a team with an avid fan base in a country where hockey is considered the national winter sport. The study was the brainchild of two 13-year-old girls in Canada, one of whom was Khairy's daughter.

They recruited 20 participants ages 23 to 63. Half of the participants attended Canadiens games while the rest watched the action at home. Both groups wore heart-rate monitors during the games.

Because the researchers included fans of only one team, the results may not apply to all hockey fans, the study noted.

The study found that fans' heart rates peaked most often during overtime periods. The second-most-stressful time for fans was during scoring opportunities by the Canadiens, followed by the opposing team's attempts to put the puck in the net.

Surprisingly, a person's interest in the sport and engagement as a fan were not linked to changes in heart rate during the game, Khairy said. However, he added that he suspects there might have been a different result if researchers had developed their own way to measure passion in hockey fans rather than adapting a tool originally designed for soccer spectators.

Although fans watching any sport can experience a similar amount of excitement as was observed in this group of hockey enthusiasts, these results may not apply to other sports, Khairy said. There are too many elements that differ among sports — such as the pace of the game, a fan's emotional attachment to a team, and even the number of high-intensity moments — that prevent researchers from making similar generalizations, he said.

A fan's emotional reaction to a game can be intense, Khairy said, and that could trigger cardiovascular problems.

Fans who experience cardiac symptoms during a game should seek immediate medical attention rather than waiting for a convenient moment, such as in-between periods, Khairy said. Many arenas and ice rinks have cardiac defibrillators on hand, as well as people trained in using them, he added.