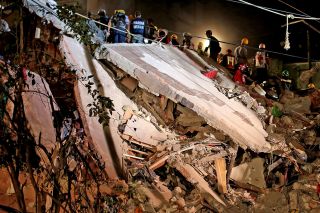 First came the 8.1-magnitude earthquake that struck offshore of Chiapas, Mexico, killing dozens and turning many buildings in the nearby region into rubble. Then, less than two weeks later and about 400 miles (650 kilometers) away, a 7.1-magnitude earthquake hit Mexico City and the surrounding area, killing more than 200 people.

"This is what you guys keep us around for," Emily Brodsky, a seismologist at the University of California, Santa Cruz, told Live Science. "It's our job to try to figure out if there's a connection." [The 10 Biggest Earthquakes in History]

The second earthquake, the epicenter of which was in the state of Puebla, also hit 32 years to the day after the devastating 1985 Mexico City earthquake. That quake caused the collapse of hundreds of buildings and killed an estimated 10,000 people.

The 1985 earthquake resulted from a lurch of the Cocos tectonic plate that's subducting, or sliding, under the North American Plate. But the two recent earthquakes happened within the subducting plate itself because of the tension that builds up as the plate bends, said Ross Stein, CEO of Temblor.net, a global risk app that aims to help people learn and reduce their seismic risk.

There are instances of one major earthquake triggering others far away, such as a 2012 rupture in Indonesia that was linked to other temblors around the world. But that tends to happen within a couple of days, or a week at the most. The Chiapas and Puebla earthquakes were too far apart for the latter to simply be an aftershock of the former, seismologists said.

"These kind of remote triggering phenomena happen very quickly," Stein told Live Science, and there were 12 days in between the two Mexico quakes.

Remote triggering also seems to happen only in particular regions, and Mexico isn't one of those areas, he added.

The seismological data don't show any signs of increased stress in the area around the second earthquake after the first earthquake struck, either, Stein said. In fact, the area where the Puebla quake hit was unusually quiet in the time between the two temblors, he said, even though plenty of aftershocks shook the area around the epicenter of the Chiapas quake.

Stein speculated that the Cocos Plate could have been pulled downward in what he called "a sudden bending event" that extended along its length and that the "earthquakes are just a sideshow" for that. But the plate is surrounded by very viscous material ¾ "it's a slab of rubber in honey" ¾ which would make it difficult for such a major downward jerk to suddenly happen, he said.

Brodsky said she wondered whether the earthquakes could be connected by activity in a portion of the plate known as the "sweet spot," which is prone to what are called "slow earthquakes."

Slow earthquakes are just what they sound like, releasing pent-up stress either at lower frequencies or over much longer periods of time than the sudden jolts that shake buildings. The Chiapas quake could have initiated a slow quake event that in turn triggered the Puebla temblor, she said.

Networks of GPS sensors could help detect whether this happened and will help show, more generally, the slow movements of the tectonic plates around the time of the earthquakes, Brodsky said. But it will be tricky, because these earthquakes were relatively deep, she said.

"The signal you're looking for is buried underneath an awful lot of rock," she said.

These are just possibilities though, Stein said. "While we can throw some ideas out, we really don't know" what happened yet, he said.

Digging into the data and building more-sophisticated models of the seismic waves generated by the earthquakes could help shed light on the situation in the weeks and months ahead, Stein and Brodsky said.

But it's also entirely possible that the two earthquakes happened independently of each other, the experts said. While the overall odds of both happening so close in time and being unrelated is likely very small, "it's not going to be zero," Stein said.