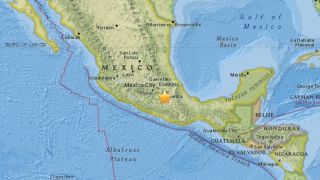 A magnitude-7.1 earthquake that struck central Mexico yesterday (Sept. 20) left more than 200 people dead, with residents working through the night searching for survivors in piles of rubble from collapsed buildings, according to news reports.

The earthquake came not even two weeks after another powerful 8.1-magnitude temblor hit the country. Both earthquakes occurred amidst a major hurricane swirling in the Atlantic, though the two phenomena have nothing to do with one another. (The 8.1-magnitude earthquake happened while Hurricane Irma was churning toward Florida; currently, Hurricane Maria has its sights set on Puerto Rico.)

Yesterday's earthquake originated about 2.8 miles (4.5 kilometers) east-northeast of the city of Raboso and 34 miles (55 km) south-southwest of Puebla, Mexico, according to the U.S. Geological Survey (USGS).

The earthquake struck at 18:14:39 UTC (2:14 p.m. ET) on Sept. 19, cracking the facades of structures, and causing some buildings to sway and others to collapse, the Washington Post reported.

Mexico is no stranger to earthquakes, as the country sits atop three of Earth's large tectonic plates. The quake happened near the boundary between two of those plates: the Cocos and North America plates, the USGS said. At this boundary, the two plates creep toward each other at a rate of 76 millimeters per year. Over time, the Cocos plate dives beneath the North American slab; this so-called subduction is happening beneath Central America at the Middle American Trench, nearly 190 miles (300 km) southwest of where today's earthquake struck.

Over the past 100 years, 19 powerful earthquakes — those of magnitude 6.5 or greater — have hit within 155 miles (250 km) of the spot where today's quake originated, the USGS reported.

Editor's Note: This story will be updated as more information becomes available.